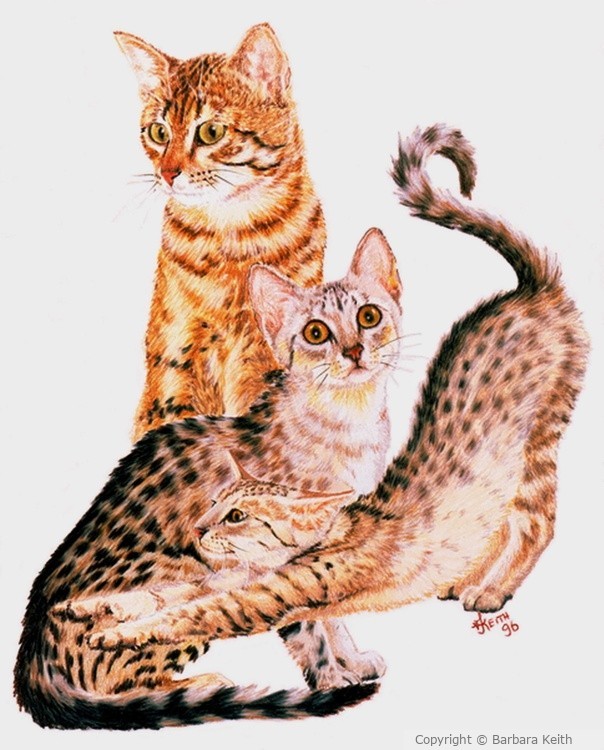 Whether the Mau is a product of thousands of years of Egyptian culture is a matter of debate, but if fanciers of the strikingly spotted cats wish to claim that they date to the times of the pharaohs, well, who knows? It could be true. The Egyptian Mau (mau being the Egyptian word for cat) is notable for being the only naturally spotted domesticated cat. In other words, the spotting pattern was not created by human manipulation of feline genes. The cats were known in Europe before World War II, but the devastation of the war left the breed in a perilous state. The breed as it is known today dates to a silver female kitten given to Russian princess Natalie Troubetskoy when she was living in Rome. Depending on the story, the kitten was given to her by a young boy who had been keeping it in a shoebox or she acquired one from the Egyptian ambassador to Italy. Troubetskoy named the kitten Baba. When she moved to the United States in 1956, Baba and two of her offspring came with her. Troubetskoy wanted to ensure that the Mau survived as a breed, so she wrote a breed standard and began breeding the cats under the cattery name Fatima. The breed was recognized in 1968 by the Cat Fanciers Federation, followed in 1977 by the Cat Fanciers’ Association. Importation of more Maus in the 1980s and again in 1991 increased the breed’s gene pool. Today the breed is recognized by most cat associations (cattime.co).

Nice arrangement of mau cats. Their markings make them look like wild cats. Thanks for a new word I learned today: MAU maybe sounds like ME AU MEOW?

Artist Reply: Thanks, and glad I could help

TERRIFIC ARTISTIC WORK ON THESE CATS MY FRIEND.