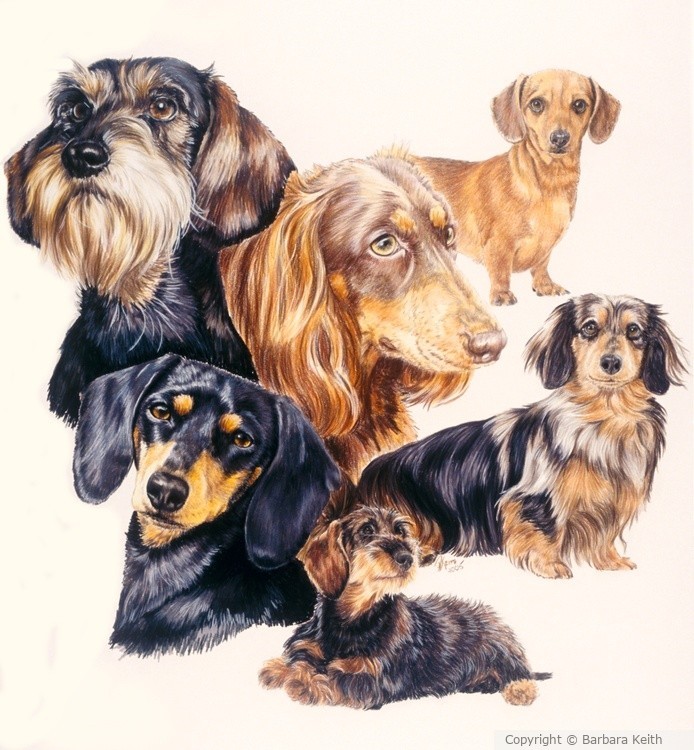 The dachshund (UK: /'dæks?nd, -, -h?nd, -h?nt/ DAKS-?nd, DASH-, -?huund, -?huunt or US: /'d??ksh?nt, -s?nt/ DAHKS-huunt, -??nt) (German: "badger dog"), also known as the wiener dog, badger dog, or sausage dog, is a short-legged, long-bodied, hound-type dog breed. They may be smooth-haired, wire-haired, or long-haired. The standard sized dachshund was developed to scent, chase, and flush out badgers and other burrow-dwelling animals, while the miniature dachshund was bred to hunt small animals such as rabbits and mice. In the Western United States, they have also been used to track wounded deer and hunt prairie dogs. Dachshunds also participate in conformation shows, field trials and many other events organized through pure-bred dog organizations such as the American Kennel Club (AKC). According to the AKC, the dachshund is ranked 12th in popularity among dog breeds in the United States in 2018 (Wikipedia).

I did not know there were varieties of dachshund that look so different. My parents had a dachshund that was a rescue and their dog was devoted to them. I used to tease her saying, "How would you like a hot dog?" and she knew and would bark at me that she did not enjoy my humor.

Artist Reply: Don't you just love dogs!! And thanks

Artist Reply: as always, thank you