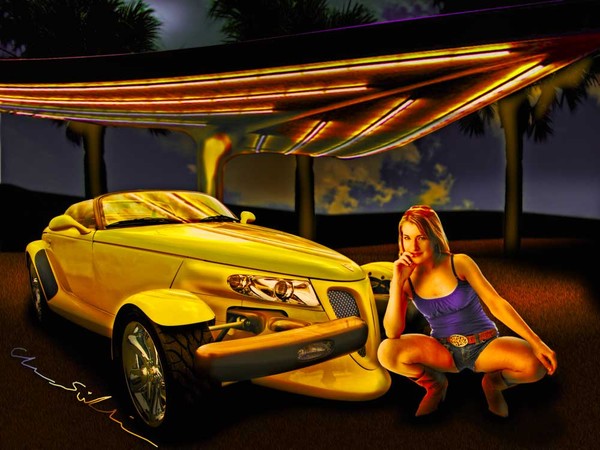 One thing I’ve discovered is that Plymouth Prowler owners are proud of their rides. I’ve also learned that even at a fueling station in the middle of nowhere and the edge of dawn – if asked if a pix can be made of their Prowler they invariably say, “Yes” and in most cases they want to be in the photo along with their retro-like buggy. Such was the case some weeks ago out North of here along Old Route 66. Not only was this nice owner willing to have the car shot, but was hopeful of inclusion in a few of the fotos. Far be it from me to deny the owner of a rod I’m photographing anything – anything at all ~:0) Here’s the interesting part – shot this pix with the sporty Canon G11 – wide-angle shot about 10mm lens-wise. Night shot this – not really sure what the settings were b/c I threw m’self on the tender mercies of the auto-flash fill and exposure three times. That is to say as I was shooting RAW I additionally bracketed -1,0,+1 so I could build this manipulated image into a contender for my “persistence of memory” concept – used several “darkroom” tools on this pix – Photomatix Pro, Photoshop and me own special workflow enablers for preping my images – one of which is Camera RAW for developing the images from the RAW data files. Whew! I’m exhausted! Have fun! Meet People! ~:0) VivaChas!

Artist Reply: No Barry move just a bit more to the left - no now to the right - yeah, thas it - Like That! Ha! Thanks for stopping by - always welcome back - in fact google vivachas and look around the site ~:0) VivaChas!

Artist Reply: Thanks Nelly - we are the golden-skinned ones ~:0) VivaChas!