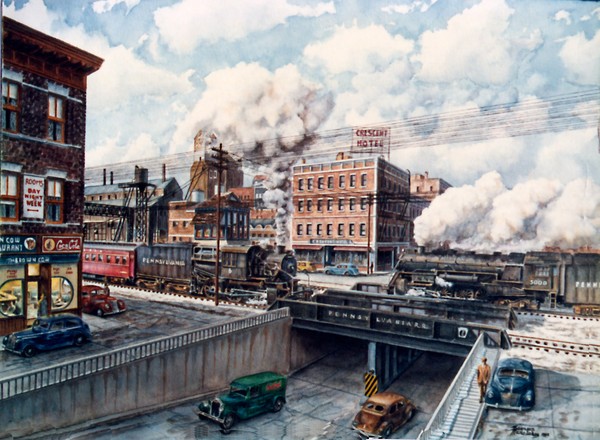 This was a fantasy scene that I created in around 1985. It was reminiscent of my memory of the freight yards and urban railroad layouts from the Great Lakes to New England. The Brown Cow Restaurant in the lower right was the name of my Grandfather's restaurant on Woodward Ave. and Blaine St. in Detroit. The building is still there and can be seen from street level on Google Earth. I got the idea and title for the painting from the Glenn Miller Big Band song of the same name. I combined these elements and my memories of the great numbers of railroad under passes that were found throughout the city. The model I used for the Locomotive 5000 was my Lionel J- Class Hudson Pacific that was manufactured by Alco Locomotive works in Schenectady, New York. The Hudson-Pacific J-Class was only used on the New York Central and was never used on the Pennsylvania RR. The New York Central was the P.R.R.'s great competitor. The little camel-back switcher No. 6 on the left was an anthracite coal burning engine and was used by the P.R.R. in cities because the use of hard anthracite was preferred in cities because anthracite coal burned so cleanly and helped lessen the pollution from the steam locomotives that burned softer bituminous coal.

Always Artistically Exquisite compositions !Thought it was a photo.

I am just dumb struck by your work...so very beautiful. My fav...all your trains (i happen to love trains)