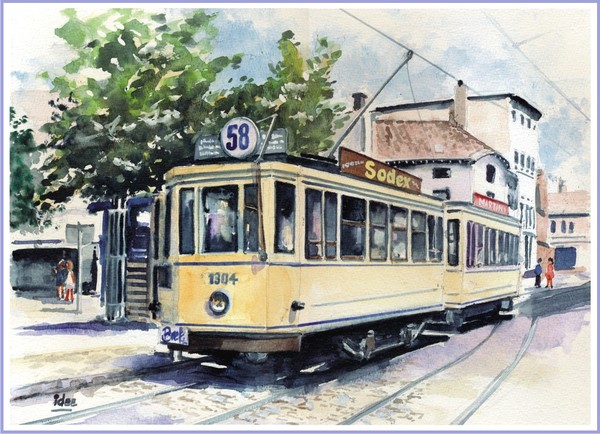 For many years tram 58 was an aureole for the city of Vilvorde. Waddling from one stop to the other, day by day he transported hundreds of people working in and arround Brussels. Altough the railwaystation was nearby, to travel to the capital, Vilvordians choose for tram 58. In the seventies the company decided, to displeasure and under great protest, to replace the "58" by busses. The nostalgic feelings of the Vilvordians must sit very deep because in the center of the city the old rails still form part of the streetscape. Rather cynical that the only place you still can see one of the old 58 tram-cars is in Tucson in the USA (!?!?). The painting (from an old photo) shows the tram at his end-stop at the market of Vilvorde, somwhere in the fifties. Image size: 260 x 360 mm