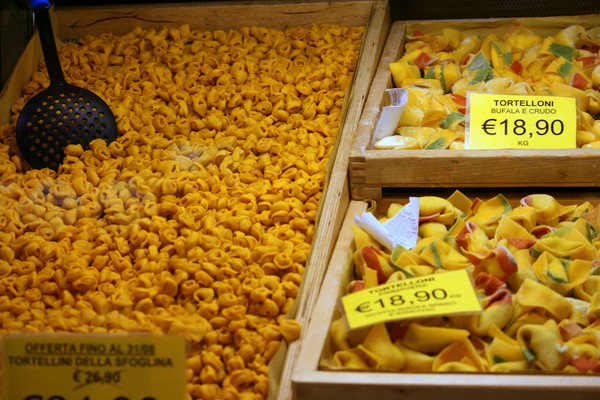 "Life is a combination of magic and pasta." (Federico Fellini) *** Tortellini is a ring-shaped pasta, originally from the Italian region of Emilia (in particular Bologna). The origin of tortellini is surrounded by several legends. One says that this dish is born in Castelfranco Emilia (province of Modena). One night during a trip, Lucrezia Borgia checked into an inn in the small town. Over the course of the night the host became so captivated by Lucrezia's beauty that he couldn't resist the urge to peek into her room through the keyhole. The bedroom was only lit by a few candles, and so he could merely see her navel. This pure and innocent vision was enough to send him into an ecstasy that inspired him to create the tortellini that night... Tortelloni is pasta in the same shape, but larger. (Wikipedia). The photos were taken in Bologna on June 2010.

Ha! what a great legend. Not sure i want to eat them anymore though. fun story and nice pics. I'm so jealous of your travels.

Greaat shots! Makes me hungry, Lili! Will go in the kitchen and make pasta NOW!