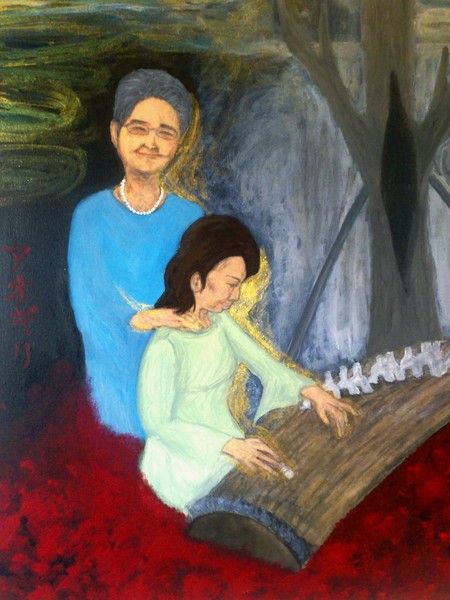 That wonderful sound of the Koto ringing in my ears! I Love it! From Wiki:- The 17-string koto (Jushichi-gen, lit. "seventeen strings") is a traditional Japanese musical instrument, a zither with seventeen strings. It is a variant of the koto, which traditionally has thirteen strings. The instrument is also known as jushichi-genso , "seventeen-stringed koto," or "bass koto" (although kotos with a greater number of strings also exist). The jushichi-gen was invented in 1921 by Michio Miyagi, a musician who felt that the standard koto lacked the range he sought. His seventeen-stringed creation, sometimes described as a "bass koto", has a deeper sound and requires specialized plectra (picks worn attached to the player's fingers with which the strings are plucked). Though his original jushichi-gen was considerably larger than a normal koto, seventeen-stringed koto of a normal koto size are more common today; these presumably do not have as deep a sound. Though Miyagi also invented an 80-string koto, and a short koto, these did not catch on and spread as the jushichi-gen did. It is still used today in various forms of traditional music; some of its more prominent exponents include Kazue Sawai, Shoko Hikage, and Miya Masaoka. The members of the Japanese band Rin' are among those who use the instrument in modern popular music.

I can hear the magic in the sounds dear Hiromi.. Love to see this work of yours.. YOUR VERY BEST.. A way to go dear!

adorable and beautiful work!! love the sound too, was playing it with my avatar in a virtual world.... wb Hiromi!!