Hoofin It On Broadway 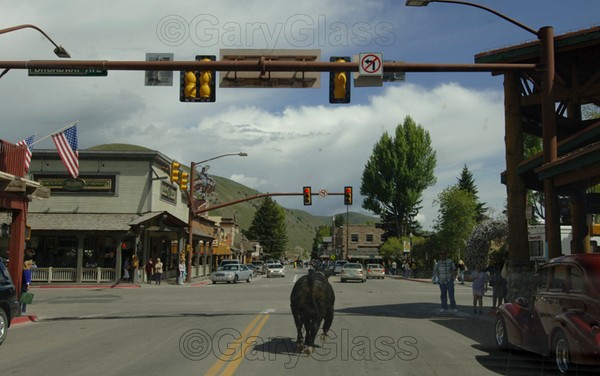 I was driving down the street in Jackson Wyoming looking for a place to eat and caught sight of a cow running down the street, I followed it a few streets thru Jackson and watched as a cop and two wranglers tried their best to catch him near a school.. The cow just did not want to be taken back to where it had escaped.. but after about a half hour they finally manage to lasso it. Gave me a whole new perspective on looking for a steak house for lunch..The street sign up on the left is a bit obscure but it is Broadway(I am on Cache Street),hence the tongue in cheek title.. For those who want orientation of Jackson Hole and the Tetons, if you drove straight for a few miles you would be on the road that views the Tetons and in GTNP.. look at the flag and the hill behind the building. Behind that is where the teton range is.. About 40 minutes drive further and you would be near the south entrance to Yellowstone. Oh and one last thought, talk about shooting on the run, I had to try and compose this and capture it with a big bulky Nikon D2 camera mounted with a 70-200 zoom lens while Driving ,making sure to watch out for cars and people coming out on the street to watch all this unfold..

What a great story and photo, Gary!

What an interesting shot and story.

Glad you survived without a crash! Cool caption!!!

Super shot and explanation. Such a tale and a picture to prove it! Great going!!!