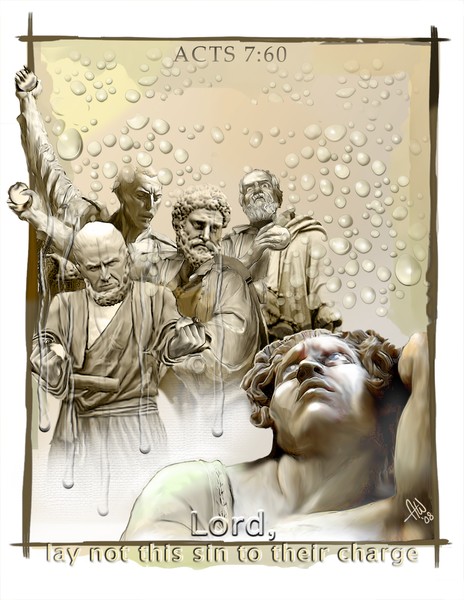 The impression made by Stephen's death was greater than that made by his life. He was not a local Palestinian Jew but a Greek speaking Jew. When Greek Jews complained of unequal distributions of funds, the apostles started the office of the seven (deacons/administrators) of which Steven was one. He was younger and unlike traditional Jews, he saw old testament scripture from prophetical viewpoints instead of traditional legalistic ones. He was punished as a blasphemer with a traditional execution of stoning after he said in Acts 7:56: "Behold, I see the heavens opened, and the Son of man standing on the right hand of God" A 30 year old Saul of Tarsus was in the audience.

I do so love your images, Andrew. You give them such an awesome atmosphere! The description is beautiful too! Thanks for sharing!

Artist Reply: Thankyou Anneke--there is a lot of drama and expression worth illustration in the Book where this comes from. (confession: the description came first and the illustration took on a life of its own)