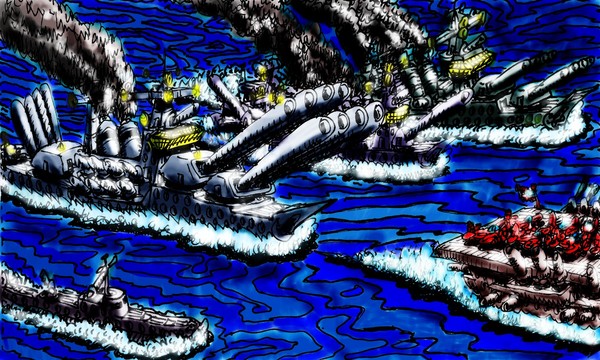 (c)2008 Here are the big guns of a World War Two era fleet. Got the idea from an old Popeye cartoon where he's up against Bluto and then eats his spinach and flexes his forearm muscles with an old battleship tatto sinking an enemy warship on his arm. It was so cool,...I love those cartoons. What a great roll model Popeye was compared to the spongey, whimpy characters today. Not only did he do what was right himself, but defended the poor, the weak, helped the widow and the fatherless. He was and is a true image of what a man of God really looks and acts like. Though Jesus was not there in words,...He was ever present in deeds and actions. Better to do whats right than to say whats right and not do it. A lot of words from the left, but very little "good" actions to back them up. And, besides, the right will always stand for whats right,...that will never change! Jesus shows you as He sits at the right hand of God. And if your actions are good even Gods left hand is good news for you because His judgements for you, when you do whats right, are all rewards. So,...give me the old Popeye cartoons,...while everyone else veggies out on todays so-called cartoons. :O)

COOL WORK MY FRIEND AND THANKS FOR YOU BIRHTDAY WISHES!!