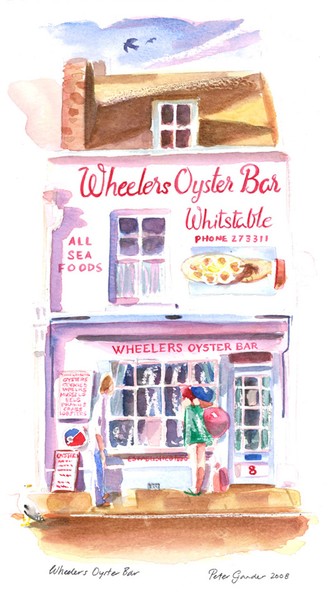 Peter's latest watercolour is of one of Whitstable's most famous landmarks, Wheelers Oyster Bar, found in his local Whitstable high street. It was established in the mid -19th century by Richard 'Leggy' Wheeler and this shop represents the first of what eventually became a chain. Hidden inside this original Wheelers is a tiny, yet massively popular restaurant behind a curtain next to the the cold seafood counter. Casual diners are found in the front bar atop stools sampling from a counter choc-full of prawns, oysters and smoked eel. The watercolour signifies Peter's new interest in figures playing a bigger role in his paintings. A couple of summertime visitors pass by on the way to the beach, keen to see what all the fuss is about. Original painted on Langton rough watercolour 300gsm paper. Comes with Peter's signed 'Certificate of Authenticity'.

Very nicely done, Petger. I like the looseness of the figures and the life they bring to this piece. The birds also help give a breezy seaside feeling.

Artist Reply: Thanks Kathryn, I hope to do more watercolours peopled with interesting characters. It's harder work, but more compelling for it!