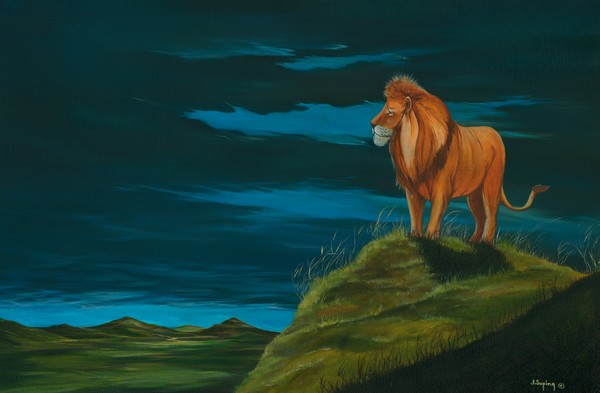 From deep within recorded history the lion has served as King. His reign has been prodigious encompassing many, many thrones from many, many countries. From the ancient Assyrian lion portrayed with wings and the head of a human to Richard the Lion Hearted there have been countless portrayals employing this magnificent cat. There have been so many portrayals of this magnificent creature that it would be futile to attempt to describe them all within this small text. So I have attempted with canvas, brush and paint to pay my little tribute to the King. I did enjoy my "make believe" visit with him as I imagined that he sat posing for his portrait. It is within this artist's imagination that allows him to do what he fancies and I fancied painting a lion. So late one evening my little studio was transformed into a lush Savannah as I began my lion Safari. I searched high and low within my imagination to find the perfect King. And there he stood atop a small hill overlooking his domain. So with my imaginary powers I stopped time and there he remained motionless. I knew that I could not hold him there for too long. My imagination could only hold the King if he so wished. So I hurried my talents to finish my work before the King would become restless and vanish. Such is the plight of my artistic limitations. My imagination is limitless but alas I remain firmly attached to my finite surroundings that beckon me back if I stray too far from them. So here is the painted result of my fanciful Safari placed upon stretched canvas for all to see. I also hope that your imagination allows you, from time to time, to leave this earthly realm and to travel to imaginary kingdoms where magical and fanciful Kings abide. visionary imagist "Joey"