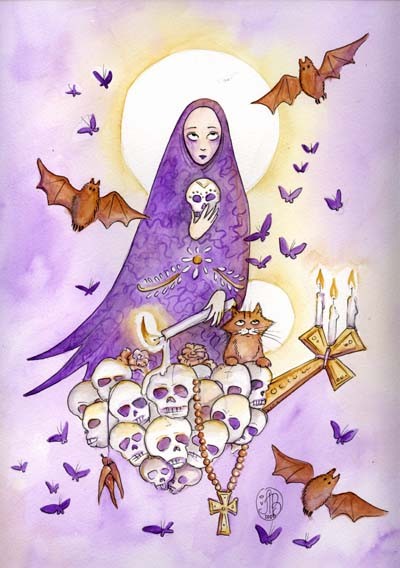 "Two important things to know about the Mexican Day of the Dead (Día de los Muertos) are: It is a holiday with a complex history, and therefore its observance varies quite a bit by region and by degree of urbanization. It is not a morbid occasion, but rather a festive time. The original celebration can be traced to many Mesoamerican native traditions, such as the festivities held during the Aztec month of Miccailhuitontli, ritually presided by the "Lady of the Dead" (Mictecacihuatl), and dedicated to children and the dead. In the Aztec calendar, this ritual fell roughly at the end of the Gregorian month of July and the beginning of August, but in the postconquest era it was moved by Spanish priests so that it coincided with the Christian holiday of All Hallows Eve (in Spanish: "Día de Todos Santos.") This was a vain effort to transform the observance from a profane to a Christian celebration. The result is that Mexicans now celebrate the day of the dead during the first two days of November, rather than at the beginning of summer. But remember the dead they still do, and the modern festivity is characterized by the traditional Mexican blend of ancient aboriginal and introduced Christian features." And this is just my interpretation - Watercolor - 9 x 12"

Excellent imagery! I learned all about the Mexican Day of the Dead recently because our art class visited the Mexican Art Museum! LUV IT!

Very imaginative on this one.

Captures the spirit of the day without imitating the typical style. A nice interpretation, where most artists just immitate!

enchanting, dreamlike - didn't thought I would ever call an image with so many skulls dreamlike, but I do! Dreamlike beautiful and full of love and a very special spiritual feel.

Artist Reply: Thank you so much Doris!

Artist Reply: Thank you so much!