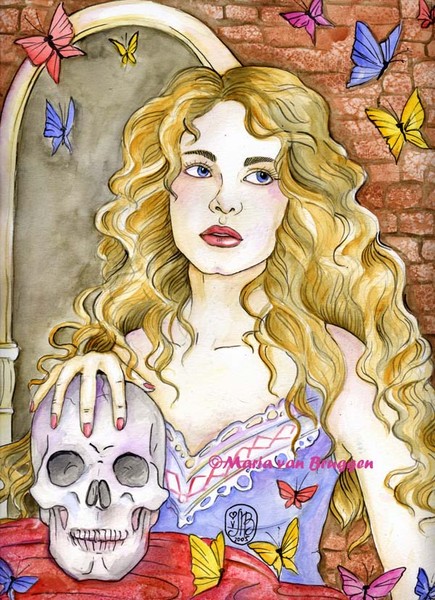 "In Christian mythology, Salome was the daughter of Herodias and stepdaughter of Herod Antipas, ruler of Galilee in Palestine. Her infamy comes from causing St. John the Baptist's execution. The saint had condemned the marriage of Herodias and Herod Antipas, as Herodias was the divorced wife of Antipas's half brother Philip. Incensed, Herod imprisoned John, but feared to have the well-known prophet killed. Herodias, however, was not mollified by John's incarceration and pressed her daughter Salome to "seduce" her stepfather Herod with a dance, making him promise to give her whatever she wished. At her mother's behest, Salome thus asked for the head of John the Baptist on a platter. Unwillingly, Herod did her bidding, and Salome brought the platter to her mother. The popular story made for excellent subject matter in artwork of Gustave Moreau and Aubrey Beardsley, and revisions of Salome appear in literature. Oscar Wilde wrote his one-act play Salomé, originally written in French, to shock audiences with its spectacle of perverse passions. The censor stopped rehearsals because of its use of biblical characters, though the play did go on to be published in 1893 with an English translation following in 1894 including the famous illustrations of Beardsley. Wilde's play became the source and inspiration for Richard Strauss's one-act opera also named Salomé, first produced in 1905. Herod's lust for Salome is emphasized, which Salome uses to gain her wishes by performing the famous "Dance of the Seven Veils." Salome, in turn, desires to have John the Baptist -- a new interpretation of the original myth. In the end, the only way Salome may have any part of John, quite literally, meant that she must demand his head be given to her. Salome fulfills her passion by kissing the dead lips of John's decapitated head, who had previously rejected her. This new and more familiar version of Salome depicts her as a seductress of her stepfather and a murderer of a saint, thereby becoming a symbol of the erotic and dangerous woman, the femme fatale." And here is my interpretation :)

I wish I could say more. But I just simply like it. wounderfl detail and color.