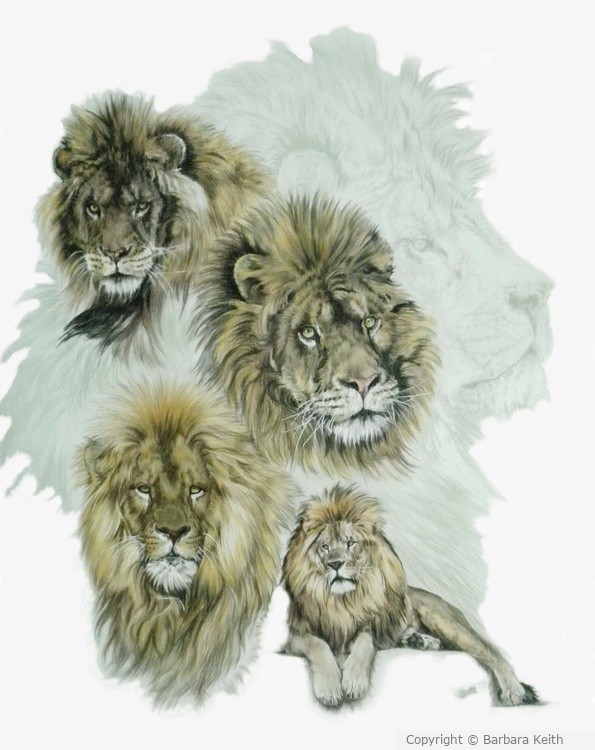 The lion is a muscular, deep-chested cat with a short, rounded head, a reduced neck and round ears. Its fur varies in colour from light buff to silvery grey, yellowish red and dark brown. The colours of the underparts are generally lighter. A new-born lion has dark spots, which fade as the cub reaches adulthood, although faint spots often may still be seen on the legs and underparts. The lion is the only member of the cat family that displays obvious sexual dimorphism. Males have broader heads and a prominent mane that grows downwards and backwards covering most of the head, neck, shoulders, and chest. The mane is typically brownish and tinged with yellow, rust and black hairs. The tail of all lions ends in a dark, hairy tuft that in some lions conceals an approximately 5 mm (0.20 in)-long, hard "spine" or "spur" that is formed from the final, fused sections of tail bone. The functions of the spur are unknown. The tuft is absent at birth and develops at around ?5 1/2 months of age. It is readily identifiable by the age of seven months. Of the living felid species, the lion is rivaled only by the tiger in length, weight and height at the shoulder. Its skull is very similar to that of the tiger, although the frontal region is usually more depressed and flattened, and has a slightly shorter postorbital region and broader nasal openings than those of the tiger. Due to the amount of skull variation in the two species, usually only the structure of the lower jaw can be used as a reliable indicator of species. The size and weight of adult lions varies across global range and habitats. Accounts of a few individuals that were larger than average exist from Africa and India (Wikipedia).

19x24 colored pencil and acrylic. Original in a private collection

Artist Reply: thank you, I do try