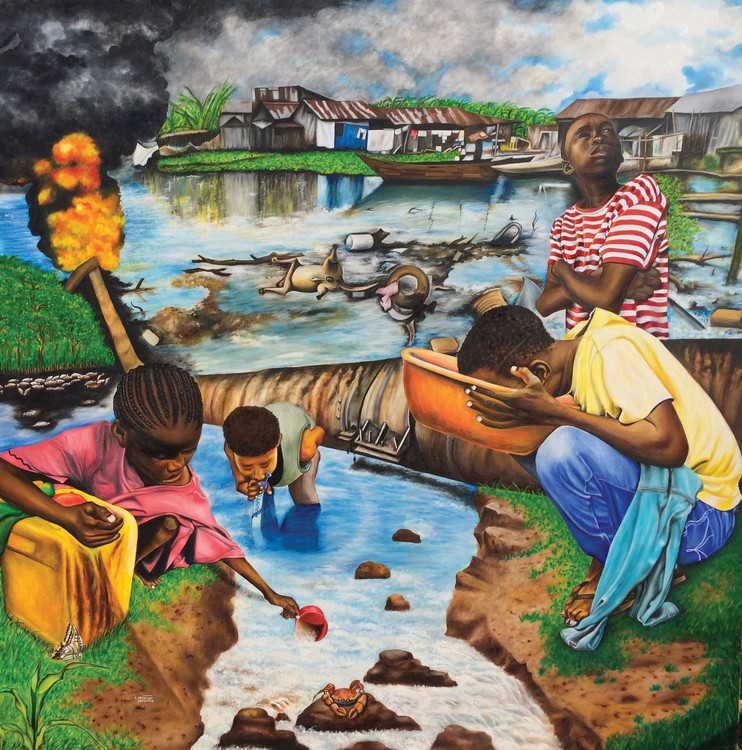 As in many African countries, Nigeria is rich in agricultural products and many natural resources. Before the advent of petroleum oil cocoa, coffee, groundnuts, palm oil and other agricultural products were the main sources of Nigeria’s wealth. Since early 1970s, the petroleum oil boom era, the Nigerian government’s attention has concentrated mainly on oil and the revenue it generates. Very few Nigerians have become very wealthy through oil money while oil pollution of air, water and farmlands has made very many Nigerians extremely poor. This is what influenced O. Yemi’s painting – “Oil: Africans’ Wealth and Woes” As an artist who originated from Nigeria, O. Yemi was moved by the plight of his people from Niger Delta in Nigeria where oil pollution affects the lives and livelihood of the people. In developing this idea, he puts some of the images he found online together graphically on his computer. He started to use ‘subtractive’ painting; a technique used by many illustrators in various ways. He did a very finished pencil drawing then coated the drawing with oil. This requires very little opaque work as the half-tone drawing beneath is like a tinted photo he was using as a reference. After the well-detailed drawing, he started to apply colours to the painting. He started from the top painting the sky with cyan blue and white colours which he later went over with black and white colours to turn the beautiful sky to grey in order to reflect the polluted air produced by thick smoke emitting from the burst oil pipe from the far left of the painting. Under the polluted air he painted a rusty-roof shack village to show the level of poverty of the people living in the oil-rich part of the country with some of the fishermen boats stationed idle at the bank of the oil-polluted river and in the foreground are the children fetching water and drinking water from the polluted river.