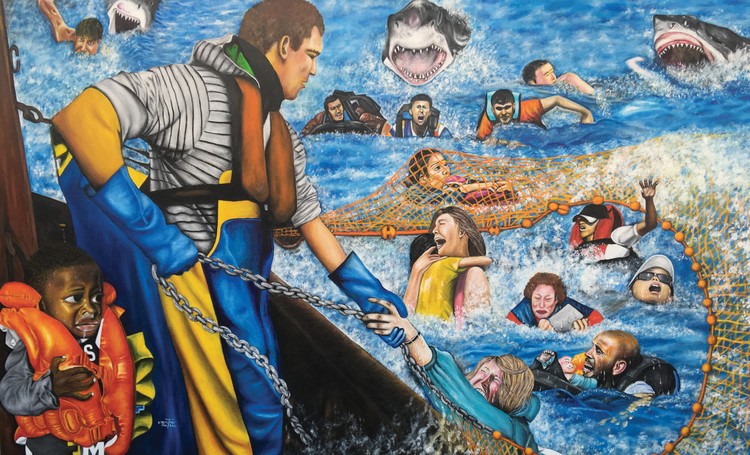 I want this painting to be Biblical subject using modern day images. While I was planning this, the horror on Mediterranean Sea unfolded. Seeing Italian coast guards fishing out African immigrants – the victims of human trafficking – from the sea and an iconic image of Syrian drowned baby being carried by Turkish police from coast resort of Bodrum (one of the Syrian drowned as they attempted to reach Greek island of Kos) made me to titled this painting – “The Fishers of Men” “The Fishers of Men” was the phrase our Lord Jesus used to call His disciples to save human soul from the predator – the Satan. In this painting, President Bashar Al-Assad, and Islamic State terrorist are the sharks, the predators the Syrians were running away from, while Africans were running from poverty and longing for a better life in Europe which made them victims of the human trafficking. Fishers of men are not only coast guards that rescued the refugees from drowning; Fishers of men includes good neighbours’ nations like Jordan, Lebanon and Turkey that are caring for larger numbers of refugees from Syria. Fishers of men are good people of Europe that welcome the refugees with open arms. Fishers of men are those that met the refugees with boxes of supplies and offering candy and cuddly toys for the refugees’ children. This work is one of the series of paintings I used to advocate tolerance for one another as we are all human regardless of our origin and religion. I love arts that do not just decorate but also evoke feelings.