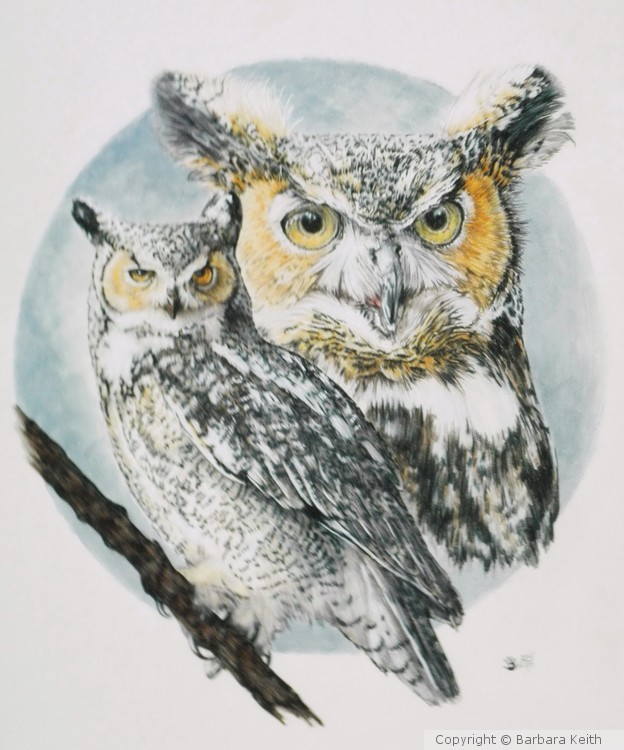 The great horned owl (Bubo virginianus), also known as the tiger owl (originally derived from early naturalists' description as the "winged tiger" or "tiger of the air") or the hoot owl, is a large owl native to the Americas. It is an extremely adaptable bird with a vast range and is the most widely distributed true owl in the Americas. Its primary diet is rabbits and hares, rats and mice, and voles, although it freely hunts any animal it can overtake, including rodents and other small mammals, larger mid-sized mammals, birds, reptiles, amphibians, and invertebrates. In ornithological study, the great horned owl is often compared to the Eurasian eagle-owl (Bubo bubo), a closely related species, which despite the latter's notably larger size, occupies the same ecological niche in Eurasia, and the red-tailed hawk (Buteo jamaicensis), with which it often shares similar habitat, prey, and nesting habits by day, thus is something of a diurnal ecological equivalent. The great horned owl is one of the earliest nesting birds in North America, often laying eggs weeks or even months before other raptorial birds (Wikipedia).

Beautiful work on this grand owl!

Artist Reply: I really love the raptors.. I think they're gorgeous and hopefully I've accomplished that