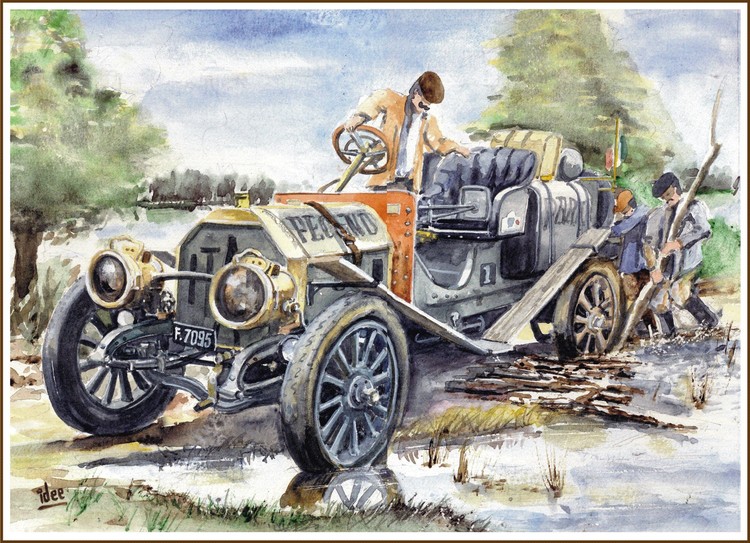 The watercolor shows the Italo in the Siberian swamps. It is a pitty that I did not found any information about the mark "Italo". Taken the car in consideration, it certainly must have been an important factory in those days. In a article in the French newspaper Le Martin in January of 1907, the editors raised a challenge to the world: ...We ask this question of car manufacturese in France and abroad: Is there anyone who will undertake to travel this summer from Paris to Peking by automobile? Whoever he is, this tough and daring man, whose gallant car will have a dozen till nations watching its progress, he will certainly deserve to have his name spoken as a byword in the four quarters of the earth... In 1907 eleven men, and five vehicles, set out to take the newly- born automobile on an adventure, for more than 10.000 km, across two continents, over deserts and through swamps, over roads who were hardly appropriate for the strongly underpowerd cars of those days. Would it be up to the challenge? Prince Borghese, a descendent of a pauperized Italian noble family and with the ambition to build a career in the army, certainly had the best cards to win the race. His Italo was not mothers most beautifull creation but, with his 40 hp, he was the most powerfull. He started the race in company of a mecanic and a correspondent. Borghese, a very organized person, went on horseback, to reconnoitring the paths in the West-Chinese mountains and hired coolis to wide them where the were to narrow. He even hided supplies and fuel along the road. At the start the Italo had no splashboards, the wooden boards are obvious trifling work excuted under the road. Borghese and his co-drivers got their part of reverse but arrived in Paris after 61 days, 20 days before their opponents. Image size: 260 x 360 mm

YOUR WORK IS ALWAYS MASTERFUL, IVO. AND I KNOW IMMEDIATELY THAT IT IS YOURS. YOU HAVE YOUR OWN WONDERFUL STYLE.

Artist Reply: Thanks Sharon, the style is coming spontaneous

OUTSTANDING MY FRIEND. NOW THEY NEED A "HORSE" TO PULL THEM OUT.. YOU HAVE CAPTURED THE MOOD SO WELL.

another awesome job my friend! you continue to amaze!