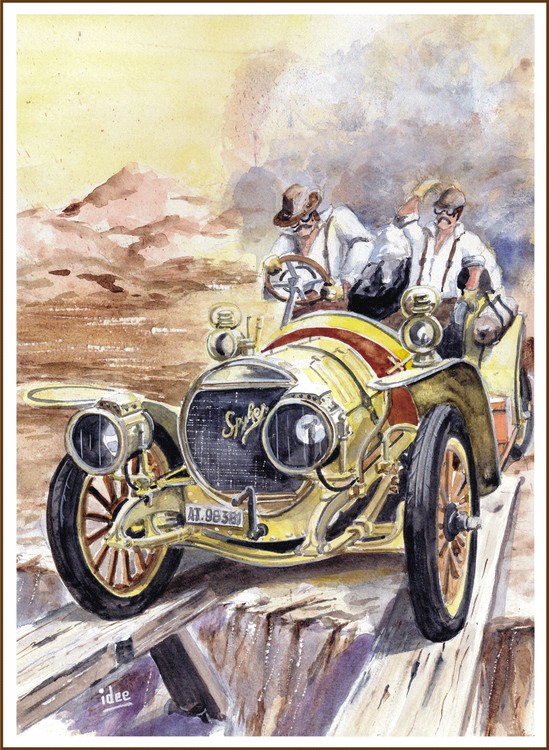 The Spyker 1905. The Dutch Spyker-brothers, coach-builders sice 1896, started building cars in 1899. Characteristic was their round radiator-grating. In 1903, Spyker was the first in the world, to build a fourwheel driven racecar with six-cilinder motor and breaks on the four wheels. After the first worldwar the factory specialized in aerodynamic sportscars. The story behind this watercolor: In a article in the French newspaper Le Martin in January of 1907, the editors raised a challenge to the world: ...We ask this question of car manufacturese in France and abroad: Is there anyone who will undertake to travel this summer from Paris to Peking by automobile? Whoever he is, this tough and daring man, whose gallant car will have a dozen till nations watching its progress, he will certainly deserve to have his name spoken as a byword in the four quarters of the earth... In 1907 eleven men, and five vehicles, set out to take the newly- born automobile on an adventure, for more than 10.000 miles, across two continents, over deserts and through swamps, over roads who were hardly appropriate for the strongly underpowerd cars of those days. Would it be up to the challenge? The Spyker in the race Peking- Paris was a 15 hp standard model of the year 1905 driven by Charles Godard and a correspondent of "Le Matin", Jean Du Taillis. Godard, a no-nonsense adventurer, sold everything he could mis, booked a first class passage to Peking and started the race without any preparation, to the chagrin of his co-driver. Like he said himself: I come to Paris in my Spyker or i'll never come back. Well, he did'nt come back to Paris. After a finacial dispute with "Le Matin", in Berlin, he left the race and his co-driver arrived alone in Paris. Image size: 260 x 360 mm

YOUR DETAILS ARE ALWAYS SO INTRICATE AND PERFECT, IVO.

Artist Reply: Thanks Stefani, a few years ago I did read the book, trilling !

Wonder illustration of the interesting history of autos!

Artist Reply: Thanks Brenda, a few years ago I did read the book, trilling !