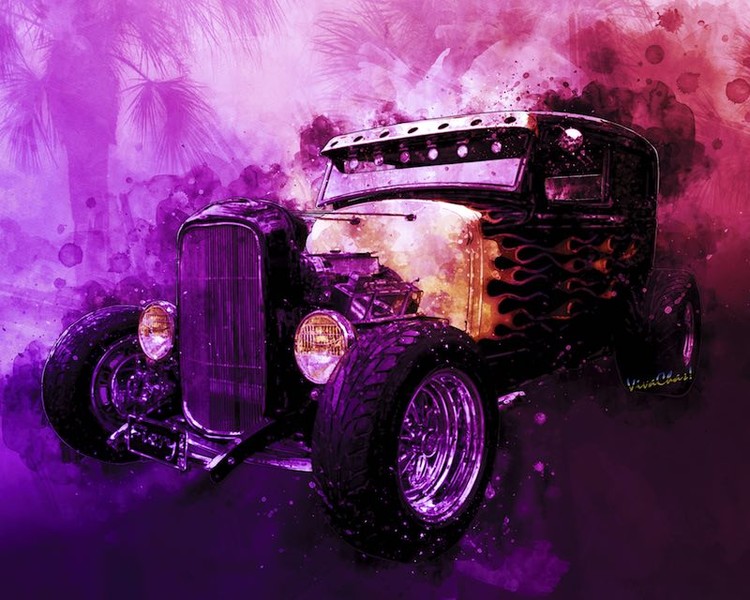 A long time ago in a place called Cali there was a '31 Ford Model A. It was a Fiery Hot Rod Classic! It had flames painted on its firewall, cowl, and sides. It also sported a flaming hot V-8 mill. It was the fasted ride on Main Street Saturday Night! All the Guys wanted to beat the Flaming Hot Rod in a street race. All the Girls wanted to ride with the mysterious driver of that 1931 Ford. But no one ever rode with him. He was a loner; a tough guy and jealous of anyone else getting close to his baby. No one ever found out who this street king was. Because the night he beat the last of the competition, he left town. Some say he's racing up in Indianapolis. Others claim to have seen him on the mean streets of San Antonio. That's where Chas Sinklier the artist says this watercolour was done. But that was the last time the Model A was seen... You need a legend on your walls. Check out the flaming swag from VivaChas! ~;0)

That's an awesome way of presenting this automobile...very unique and interesting, love the colors and it's sort of magical in your rendition. Great work...I'll have to look at the rest of your work...I'm intrigued.

Stunning You got the Artist Juices flowing again! Great use of lines and appealing colors that provide such a sweet presence.

Artist Reply: Thanks John!! - I've been working steadily - a friend enticed me to spend some time over here - it's nice! ~;0) VivaChas!