Bus journey in the fifties 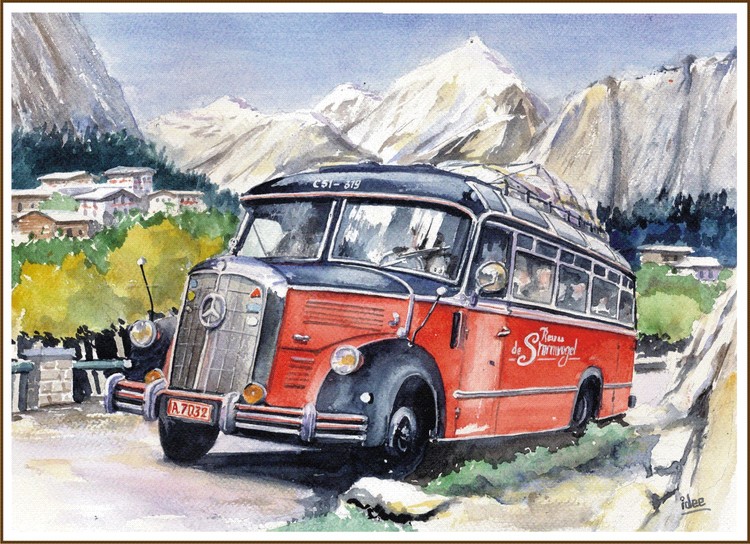 A while after the war, tourism began to turn up. In the fifties the seaside but especially the mountains were very popular and, those who could afford, dreamed of a bus journey to Switzerland. There is no comparison with the busses today and these from those days: no isolation, no airco, no toilet, no airsprings and the luggage fasten on the busroof. Recently I read an article with extracts from a dairy, with the story of a ten days bus voyage to Switzerland about seventy years ago, it was amazing ... I cite a passage: "On our way to the next hotel we had to cross a col (which one ?). The road was so steep, narrow and full of hairpin bends the bus had to turn frequently in two times. Altough the landscape was overwelming, passengers kept their eyes on the driver, while healding their breath. This last, with an extinct cigaret in the corner of his mouth, tried obvious to save appaerences. With his eyes wide open fixed on the road, sweat on the forehead and muscles flexed to the utmost he drove the reluctant bus, in first gear to the top, if he did it dailly. After, what seemed as eternity, we reached the mountain pas. The driver stopped the bus, stepped out, opened the hood of the steaming motor, lighted his cigaret, rolled his shoulders and walked to the border of the gap. I still hear him mumbling : (free translation) Not with me you basterd ... on which the whole travelling party exploded in a ear-splitting applause. " End of the cite. The article inspired me to this aquarel with a 1953 Mercedes-travelling bus climbing the road in an Alpine mountain-landscape. Image size: 260 x 360 mm

LOVE THE STORY, LOVE THE PAINTING. TERRIFIC WORK MY FRIEND.

Artist Reply: Thanks Joanie, hope you understood my language

Artist Reply: Thanks Sharon, hope you understood my language

NICE MERMORIES, IVO !!! THIS WAS A REAL EXPEDITION TO TRAVEL LIKE THAT !!!