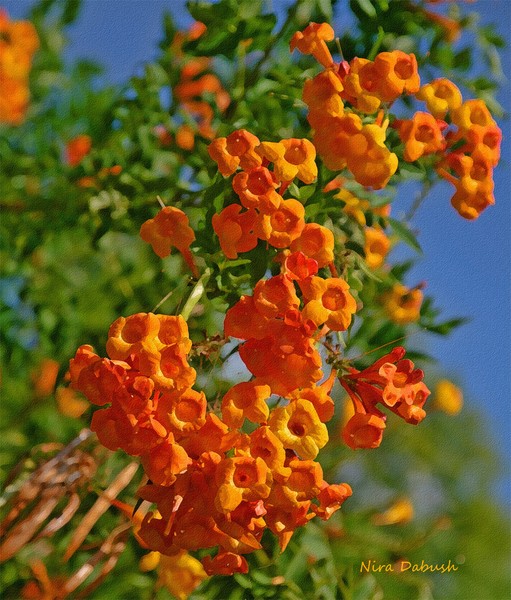 That same Morning.. 5 minutes later
Taken : Oct, 17, 13.
And then... 5 minutes later, when I crossed the floral square, to take some more photos at another corner...
A driving teacher stopped the car and asked me : " Why photography ? ..."
Half confused, I replied: " Why not! ... "
We had a small conversation, and I said to him : " You have a driving student at your car... "
Don't worry about her time, I'll give her the time later... "
He could not really park the car there, so he put his hands on the wheel, and reversed the car on the pavement, went out the car and bring his camera from his trunk, to show me a photo,..
And so on, and so on..
He is a sculptor too, it seems..
I suggested Flickr to him :-)
And added that being a driving teacher is important too.
One should earn a living.
Photos that corner I did not take, but this photo, I took 15 minutes later, in my town. YES, AUTUMN.

May we sEE the LIGHT, in what we do.
Thanks for visiting.
Copyrights (c) Nira Dabush.
Enjoy the weekend!

Very Charming ! Love the colors and Details! GREAT Artistry, with great skills. I'm Dazzled And As if Drawn into This By Magnetism!