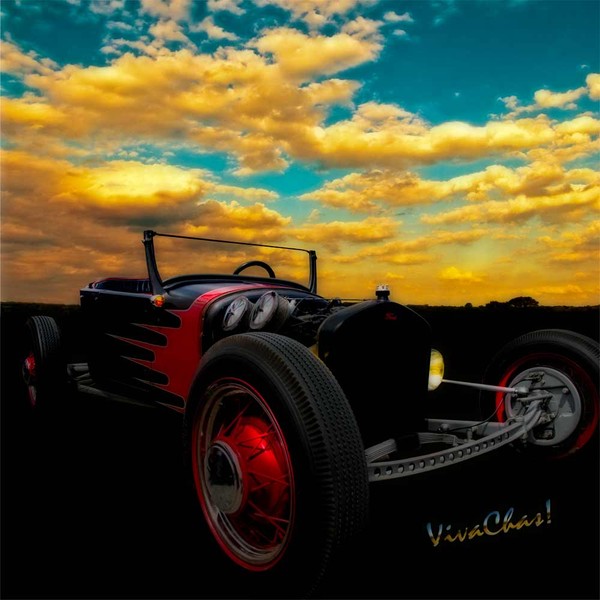 Model T Rat Rod Cruisin Out At Sunset don't need no stinkin V- 8 ~:0) VivaChas! There is nothing in this world like Out Cruisin' round Sunset when U got a Model T Rat Rod Ride to do it in.  This particular rat rod is specially nice.  What makes it so in part is the engine.  It's a clean uncluttered straight six with a couple side draft carbs.  That simple mill is so light and responsive that driving this ride is like it's hard-wired to Ur brain.  U just think about where U want to go and the rod moves there ~:0) This nimble Model T Rat has other willing contributors to its fine-a-tude.  Being a Model-T Roadster U can see all the wheels.  So if ur a nervous driver - U can keep an eye on just about everything.  Everything like those oh-so- fine red wire-wheels.  Man those things just about purr at speed as the breeze whooshes through 'em.  Speaking of the wheels - normally drum brakes aren't my binder of choice but I must say since this rod weighs about as much as Aunt Nelly's hat - they stop it just fine. This nifty little Model T Rat has the driver in-touch with every part of the car.  Wonder how we're doing on fuel?  No prob - U can hear it sloshing in the great honking tank tucked just behind the passenger panel.  That's Fun!  Some of U may recall I recently posted a shot of the back of this roadster a few weeks ago.  I promised to let U see the front of this little Model T Rat and this is it in case U hadn't noticed. One thing about these Model T two-door tubs is - they are small.  They'd make a great hot rod for a woman or a smaller man.  The other day we saw the owner of another T-Bucket out tearing-up the roads in Helotes.  He looked like a massive foot-baller in that tiny tub. Course maybe he is a foot-baller.  I just know that if ur looking for stretch- out comfort a diminutive roadster like this one is a tight fit.  Still a barrel-of-fun to drive though.  Even with the bugs in the teeth bit - Ha! Personally I'd get a print of the back-side of this Model T Rat and this one of its front and hang 'em side by side like ol'what'shername did.  She sees so much of my work that 'bout all I can get out of her is a sincere, "That's Really Nice."  For this one she put in the order right away for her print and praised it loudly.  And that is praise indeed when ur ol'lady goes out of her way to let U know U done good ~:0) VivaChas!

This is a Fabulous Car scene! Fantastic artwork, Great colors and Stunning picture and Perfect View !

Artist Reply: So U like it then? - Ha! Just a little joke from VivaChas! Thanks for the inspiring comment John ~:0)

Artist Reply: Many thanks Elizabeth - u can see more at my hotrodneyhotrods do tcom blog of many pix ~:0) VivaChas!