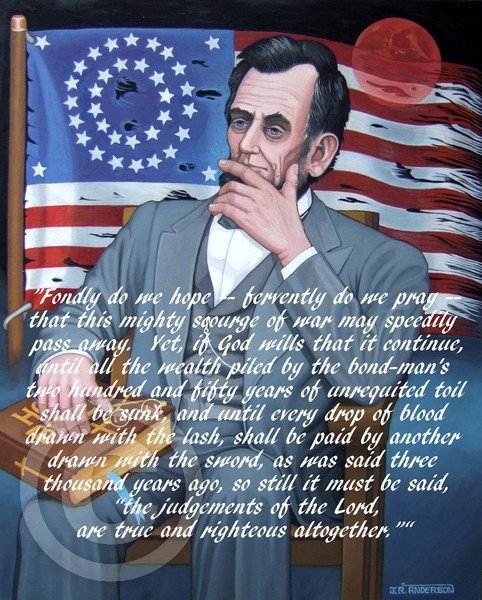 I was inspired to do this painting of Abraham Lincoln because of the many Biblical references that this President conveyed to the people of his time. He demonstrated his Christ like attitude to his family, friends and enemies in many ways during his life. I believe that the Lord put this man in power to accomplish his purpose for the United States of America in respect to judgment and future purpose. Everyone of his time did not believe that the war would drag on for so long and indeed there were times during the war where it could have ended sooner if the union commanders had taken timely action. It is at his second Inaugural address where he reaches the conclusion that this civil war was a judgment of God for the sins of slavery. The red moon in the painting symbolizes the judgment of God and the tattered war torn flag represents the suffering that this war brought to a nation. Abraham holds the Bible in his lap and ponders the suffering of the nation. Below is a portion of Abraham Lincoln's 2nd Inaugural Address . I highly recommend that the entire speech be read. The Almighty has His own purposes. "Woe unto the world because of offenses! for it must needs be that offenses come; but woe to that man by whom the offense cometh!" If we shall suppose that American Slavery is one of those offenses which, in the providence of God, must needs come, but which, having continued through His appointed time, He now wills to remove, and that He gives to both North and South, this terrible war, as the woe due to those by whom the offense came, shall we discern therein any departure from those divine attributes which the believers in a Living God always ascribe to Him? Fondly do we hope -- fervently do we pray -- that this mighty scourge of war may speedily pass away. Yet, if God wills that it continue, until all the wealth piled by the bond-man's two hundred and fifty years of unrequited toil shall be sunk, and until every drop of blood drawn with the lash, shall be paid by another drawn with the sword, as was said three thousand years ago, so still it must be said "the judgments of the Lord, are true and righteous altogether."

Very good James! Your inspiration for painting Honest Abe has heart and soul in it. I hope you will have the chance to paint a leader like him someday soon!

Artist Reply: Thank you. Yes, I too hope we will get a man of integrity in the White House soon.

Fantastic job, James. Lincoln was one of our greatest presidents. How I wish we had a president of his caliber today.