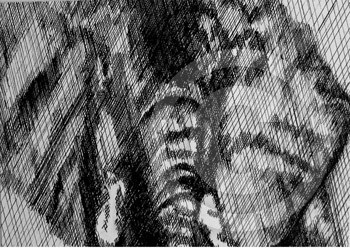 The idea behind this elephant series was to take the same pose and create artwork using different media and techniques to show and see how it changes the perception of the animal, how cognitively the viewer would process the difference. One is done in pen and ink while the other two are done using Gouache paint. The pen and ink is done using straight lines in the cross hatch technique, the challenge with this drawing technique is to create form, structure and roundness using nothing but straight lines. Using the Gouache paint, the idea was to see what it looked like using only black and white, to see how dramatic a difference it would be from using a gray scale color scheme. How would it look using three gray scale colors from the gray scale chart., would it be as dramatic a representation as when done in just black and white paint. To me each presents the animal in a slightly different light, the gray scale softens down the animal and makes it less large and imposing, where as in the black and white piece it looks the opposite, it appears very large, imposing and very dramatic. To me the Crosshatch version is more artistic (in the traditional sense) and gives the animal a very different look, softens the mass and structure of the Elephant. All three techniques area available as limited edition art cards (ACEO). All are edition sizes of 500 and are signed an numbered by the artist. I hope you like the artwork and will leave me a comment or two about the work. And of course buy one to either start or add to your collection of ACEO's. Also keep in mind, They make great gifts & they look really nice, matted & framed.

this image is also availible as a ACEO limited edition signed and numbered
$ 4.50

This one is so creative and has immense depth, but kind of lacks definition.