"CAPTURED BY THE BOHEMIAN RHAPSODY" 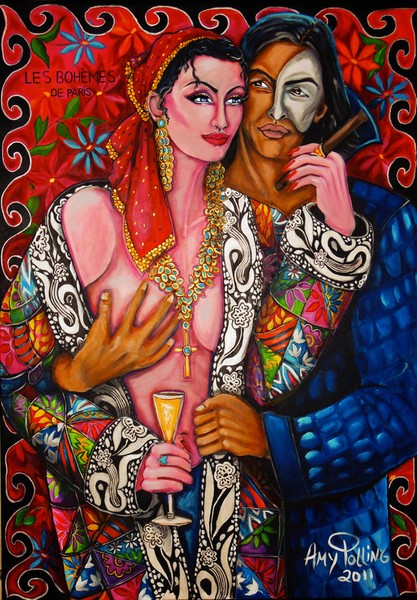 “CAPTURED BY THE BOHEMIAN RHAPSODY” (Les Bohèmes de Paris) (acrylic on canvas/140x100/2011) Price: 5.800 Euro~~~ “Is this the real life…or, is this just fantasy..? Caught in a landslide; no escape from reality. Open your eyes, Look up to the skies and see”…. Paris 1962 The year, that Margot Fonteyn and Rudolf Nureyev first danced together in a Royal Ballet performance of Giselle in London, Beatles drummer Pete Best was fired and replaced by Ringo Starr, the 34th Academy Awards ceremony was held; West Side Story won Best Picture, France and Tunesia re-established diplomatic relations, Marlyn Monroe died of an overdosis…and, French Actress Marie Trintignant, was born…... I was a young artist at the time; a stubborn idealist, filled with rebellious fire & passion; to change the world and to kick against the shallow and insensitive taboos in the World. Money was a subject of non-interest to me; as often, most of those who knew wealth, abused the word Peace & Charity for their own benefit, and, did not have the Intellect or Depth, to see further then their wealth and their status of fortuna; some called me Revolutionair… and others, would call me Elitair...... Men would find me intriguing and “different”; however, as was mentioned, I was stubborn and in search for Unique Love, which felt as warm & loving as the selfmade flamboyant colourful coat that I was wearing; made of little pieces of material; each piece, representing a precious memory from my childhood. Due to my unusual flamboyant coat, women often saw me as a threath…except for those, who had integrity and stood grounded in life and who realized that “happiness & beauty” is within…and not, in the trademark of a coat. “My pockets are empty....but, my heart is filled with Passion & Wealth” ~ Oscar Wilde ~ On a semi sunny day in June, I was strolling sûr Le Pont Mirabeau and, while I was eating ma petite baguette from the local boulangerie at Sentier and dreamingly gazing across la Seine….all of a sudden, my eyes spotted a stranger’s warm gaze down below, staring at me intensively; a mysterious man, wearing a Mask of Magnificense & Splendour; set with uncountable Rubies and Diamonds, which sparkled in the joyful streams of the Sun. The man held up a bottle of Don Perignon Champagne and waved at me to come and join him for a glass, down below Le Pont Mirabeau... “Sous le pont Mirabeau coule la Seine Et nos amours, Faut-il qu'il m'en souvienne, La joie venait toujours après la peine”... We talked and talked, drank Champagne and smoked our Cuban Cigars…and, were dancing the Tango on the crying tunes of some kind of Rhapsody, played by a lonely violist from a little boat sûr le Seine. And before we realized, the Sun switched places with the Moon and the mysterious Veil of the Night embraced us… It felt like I knew him longer then one life and I know, that he felt the same… That night, I told him my life story by showing him my coat, made of all precious memories; something, I had never told anyone before in my life….the man felt as warm as my bright coloured coat....and, I loved him then....and, I love him now... Although, the Mask of Splendour was still covering half his face, it did not take long; I could see right through it, like it was made of transparent and exquisite Lace, to suit the beauty of his warm & sensitive Bohemian Soul. In the darkness of that Parisian night, he promised me “the Moon and the Stars” off the Parisian Sky…and I know, he wóuld….if only, he cóuld… But, it were not the Rubies and the Diamonds on his Mask, that caught my heart; I was captured by what was underneath....his smile and the vibrant warm colours of his Soul, which would blend so well with the colours of my Soul...and, make an ultimate colourful composition for “The Bohemian Rhapsody"......... All Rights Reserved by Amy [email protected] and, with some help of my friends: Queen and Guillaume Apollinaire (1880 - 1918)

When I watch all your most beautiful and captivating art works, i am thrilled to compliment you and say: a new Gustave Klimt has arisen, but with her very own unique style and signature! You are an eye opener, in a world where everybody seems to be a wanna be artist. You are a true artist! Greetings from beautiful Vienna in Austria, Reinhart Bach