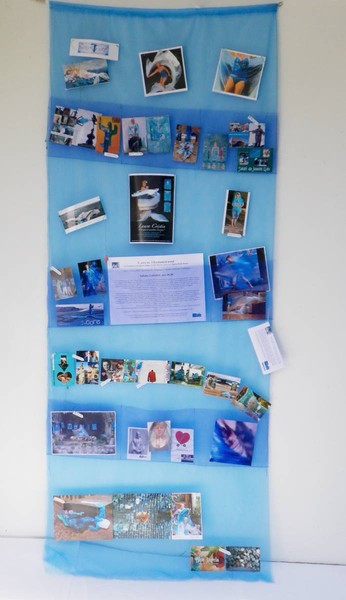 this wave, cm 250x100, was made for standing in the 'fence' of a trees installation of Arte per l'Ambiente, to announce the performance "S_core nr. 3: Enchanted Wood" at Udine Fair. The wave is made in tulle so as to host pictures&memories from my art-life as painter-performer in the last years. On October 2nd, 2010, at Udine Fair, at Padiglione 7, in the trees installation of Andrea Rusin (Artisti per l'Ambiente) at 6.30 p.m. Prelude to a concert of African music, a "S_CORE nr. 3" ENCHANTED WOOD will be played. The action by Laura Cristin, in her (usual) art identity of Sheren, gives voice to “i moti del cuore”. Sin Palabras, with movements and dancing interweaving with the music of Dario Della Rossa. The current "S_core" performance starts from the Silence and creates each time different notes with the places, the persons, the feelings of the context. "S_core" started last May at the Nimphaeum of Cosenza, back from a journey in the myths of Sicily, when the latest production of Sherensigns (painted and embroidered on light textiles, featuring a personal and original path through the Major Arcans) where hung in a significant place (once dedicated to Venus) and the pianist Della Rossa composed the homonymous piece. "S_core" took a more complete (though, always 'open') form in Venice, on May 29h, when it was performed at a finissage of the exhibition "La Bisiacaria a S. Marco". On that occasion Cristin gave 'life' to her installation consisting in a big painting "comme un oisEAU" and 2 sculptures from the series MySELF (a dressmaker dummy and one pillow-identity). “S_core” comes from the heart and involves the core of the Nature, even objects become subjects in this connexion. The body language reveals, researches, and reflects the anima and interacts with the surrounding, making the waves of A MARE. With the magic of the polyethylene veils, a stick of rain, little but pregnant objects (mostly, coming from friends and/or from travels) to be played, this Time, in Udine, in the Enchanted Wood consisting in 6 big trees, trying to reach the sky, that Andrea Rusin had installed in Fair Pavillion nr. 7.