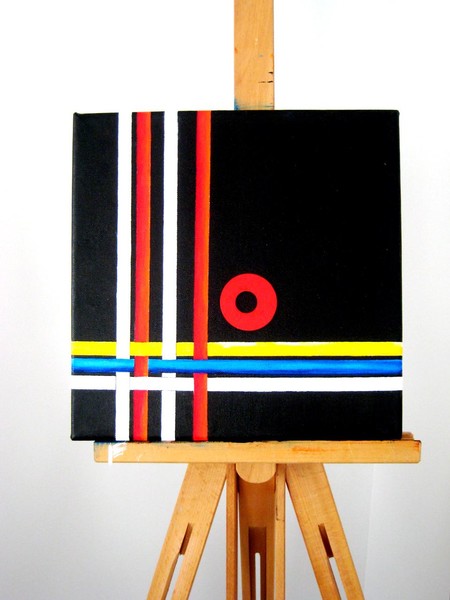 In the close up (2nd picture) you'll see I played with "Flat and Round" (depth):
The blue and red lines give a round impression;
The yellow and white are flat.
That's what color can do! ("Push-'n-pull" technique)

Linear perspective- the technique used to create the illusion of space in a painting or drawing- has served as the golden rule for artists since the Italians developed it during the Renaissance.

Then along came Hans Hofmann (1880-1966).
Developing a technique he called “push and pull,” Hofmann proved that the illusion of space, depth, and even movement on a canvas could be created abstractly using color and shape, rather than representational forms.

With Push'n Pull, Shapes and colors interact not only the feeling of space but as movement as well.
---Warm colors appear to advance;
---Cool ones seem to recede.

Light and dark values, overlapping shapes, all help to create the illusion, that the composition is in motion, or "breathing", leading the eye to each part of the picture rather than letting it rest in one spot.
In this way the viewer becomes actively engaged with the picture, a goal Hofmann claimed all artists should strive for.

very interesting work, I can see Bernie inspired you with this style. I love it !

Artist Reply: Thank you for your wonderful comment! -Love and Light for 2010, OLGA