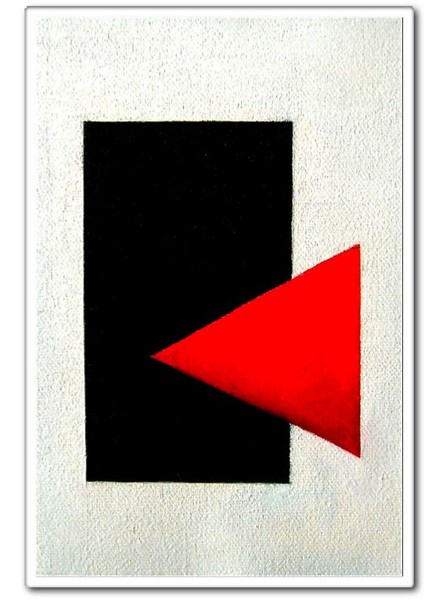 For accompanying music, please click on the arrow:
_
Yesterday I painted this small composition
as an example for my super talented Abstract Art Class.
Tomorrow I'll teach my students about
Malevich' Suprematism
This is my own design: Art Style with a twist:
I used Pieter Mondriaan 's Primary Colors.

INFORMATION:
Suprematism is a Russian art movement, paralell to constructivism
which influenced that movement as well.

Suprematism focused on simple geometric shapes against a white background
that Malevich pioneered in 1915.

Because of the simplicity of these basic forms they were able to signify a new beginning.
It wasn't until later that suprematism received conventional museum preparations.

Originated by Kazimir Malevich and disseminated by El Lissitzky and the Bauhaus school,
it had far-reaching influence on Western art and design.

Malevich aimed to convey the "supremacy of feeling in art,"
which he believed could be expressed through the simplest of visual forms.
And boy was he right!
He exhibited the first Suprematist compositions in 1915,
the year he issued the Suprematist manifesto.
The purest embodiment of Suprematist ideals can be seen in his
"White on White" series (1917 – 18).

These reductive geometries seem to be the product of extremely rational thinking,
but Malevich’s writings confirm that ultimately he was seeking
a strong spiritual feeling.
Describing a painting he had made of a black square, he said,
"The square equals feeling, the white background equals nothingness."

The Stedelijk Museum in Amsterdam (the Netherlands)
has quite a collection of his work.

( Bernard Mueller has a couple of nice examples of the Suprematism style in his portfolio.)

Stunning detail,Excellent composition! The light and shadows create interest and a focal point. Love your style in this!

i too love the triptych and the minimalist stylings there enclosed