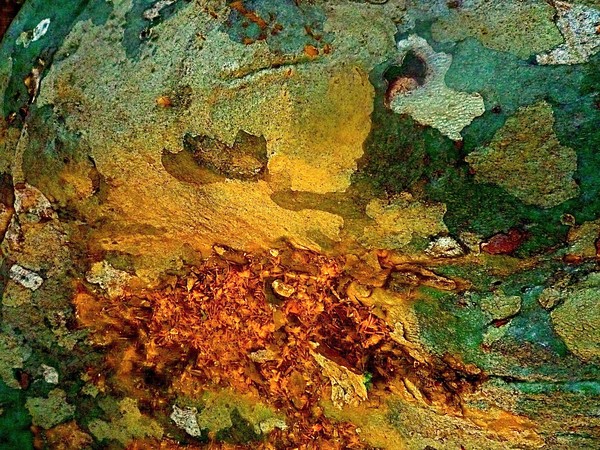 This surreal landscape is populated with a myriad of disparate imagery, an expression of our first language, primary process, the visual processing of the infant before the symbols of language develop. The language of the unconscious is universal and like music can be shared with anyone regardless of our planet's boundaries that we refer to as countries. There would be so much less hate, violence and war if these boundaries were removed and we could join together as a united, not divided planet. Great artists and musicians have expressed this hope through their music. John Lennon's Imagine is probably the best known song to express the wish for universal peace.. The other phenemenol artist to write songs about the senseless damage to our earth in "We are the World", "Earth Song" among many others was Michael Jackson. I am stunned to write about this extraordinary and magestic performer and humanitarian in the past tense. His recent passing has not registered and the loss I feel is too profound to use words to express the deep feelings of sadness I feel about his tragic death. The lyrics in his poignant song, "Gone Too Soon" that Michael dedicated to the passing of Princess Diana play in my head as I struggle to deal with overwhelming emotions when I listen to his brilliant recordings. I know it will take time to heal the pain as I journey through his troubled life reflected so poignantly in his music. There are few people that are truly original kindred spirits who touch our life with their profound spirit and share their extraordinary gifts that we treasure for a lifetime. Now he is a gift to the Universe and his message will continue to influence all the generations that will benefit from his genuis. Over the last few days, I took some photographs of tree bark and as I scanned the tree to take the shot, I repeatedly saw his image. I see his face lying among a bed of rust leaves. I never imagined that my bark art photography would help me heal as various images appeared in new and surprising ways. Bosch and Bruegel, the Flemish painters of the 14th century influenced the Surrealists allowing us to enter a mysterious world pf contrasting juxtaposition of seemingly unrelated images that derive from the personal and collective unconscious. The closest language to express imagery that does not depend on rational or logical thought is poetry. One of my favorite poems, the deeply meaningful "Autumn Rose Elegy" was written by the spiritual poet Rumi and after reading it again, I felt calmer as if a great spirit, a "strange autumn rose" had been released to rest in peace. I want to share this poem with you, Autumn Rose Elegy, especially when dealing with the loss of a loved one. Rumi's beautiful words are especially meaningful to me after choosing it to engrave on a friend's ebony tombstone after she died several years ago. "You’ve gone to the secret world. Which way is it? You broke the cage and flew. You heard the drum that calls you home. You left this humiliating shelf, This disorienting desert Where we’re given wrong directions. What use now a crown? You’ve become the sun. No need for a belt: You’ve slipped out of your waist! I have heard that near the end You were eyes looking at soul. No looking now. You live inside the soul. You’re the strange autumn rose That let the winter wind in by withering." Autumn Rose Elegy Rumi Translation by Coleman Barks

Fluid moverments. The style is romantic, magical and uplifting.And so much to absorb, to savor in this notable and memorable exquisitely rendered dimensional scene, could deceive the eye convincing it was a landscape on some alien planet, or a place on this world perfected beyond what reality allows.

Sorry, didn't log in. Was in admiration of your wonderful photograph!