Kutch Mutch - The Taste of LOVE 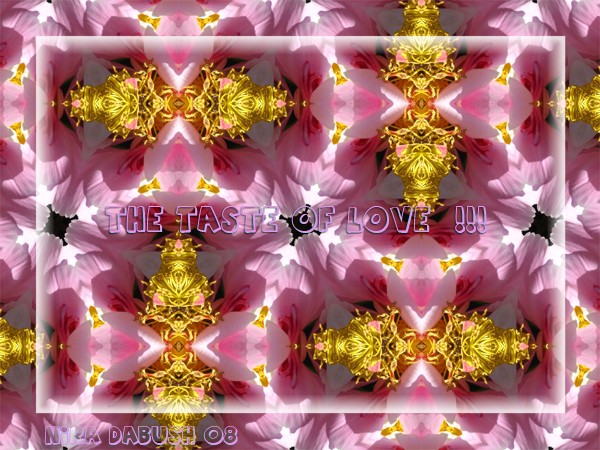 Still dealing with LOVE..Perhaps because for me, is the most important component of LIFE.Love has taste...!!! This work was inspired by well known Love story here, of Pola and David Ben Gurion. Ben Gurion was the " architect " of the state of Israel before Israel was born...and the first Prime minister of Israel also. He loved very much his wife Pola, as She loved and support him. Pola was a nurse, but much more was looking after him and taking care of him. She used to make him a (What they used to call)"KUTCH MUTCH " = a dough of white cheese, sour milk, fruit mash , a bit of raspberry for the taste...For him it was a "kutch mutch " for her, the milk. He didn't like it...but used to eat it twice a day, every day. After Pola died..one day their daughter came to visit her father and saw him eating the "kutch mutch" . She asked him, why he still eats the kutch mutch, after all Pola was not alive anymore...He said ...he ate it in memory of Pola...Well...they were different generation, if you wish to think...but I'll say...They really loved each other...In their memory..FOR BETTER LOVE.................. ~~~~~~~~~~~~~~~~~~~~ P.S: I really used to make great cooking once, but it was ME, that mostly ate it ...FAST life in the modern times, I guess. Copyrights (c) Nira Dabush

DAVID BEN GURION is one of my alltime heroes Nira. I am currently painting a mural portrait of him and have taking several years to collect the sections and pieces for it. He was truly foreordained for the commencement of Precious Israel after the Balfour Declaration. My good friend Pat David just lost her husband who used to be a body gaurd for the first Prime Minister of Israel. I have done sketches of him as well and look forward to visiting the David Ben Gurion University and monuments in his honor. Even the Mossad, America, and the world respected him and his wonderful wife Pola.... thank you for the insight... dear friend* H