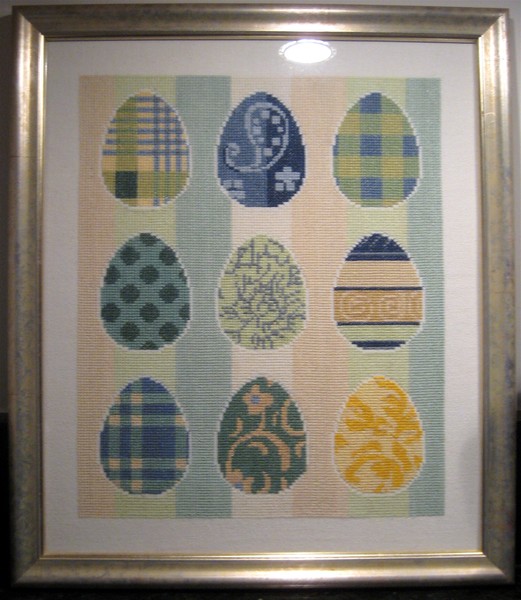 I executed this one on a small even-weave Aida linen.

I like the silk colors chosen for this Easter Project.

The real cross-stitch history starts in the Middle Age. It was proven that between the 10th and 13th centuries, the castellan, when waiting for long times, were copying charts from rugs that their husbands were bringing back from Orient between two crusades.
The samplers stayed in the families from generations to generation, pile up.
Most often in linen, the clothes were stitched with strands of silk or wool in the same color tones, because the cotton was still rare in Europe at this time and colors not yet available in commerce.
In 1500, the first printed patterns appeared. They came mostly from Germany and Italy, and, in 1586 was published in France "La Clef des Champs", a leaflet containing patterns of various simplified flowers and animals inspired from Oriental designs and symbols. __________________________________________

well done and thanks for the history, very informative...

This is so beautiful...I really appreciate the history also. You are good at everything...