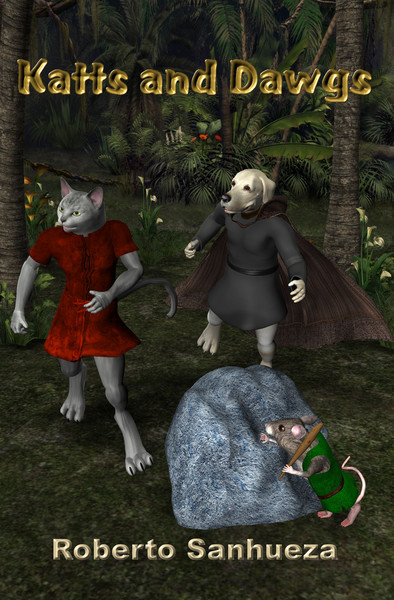 This is the cover I did for a fantasy novel by Roberto Sanhueza, published by Bewildering Press.

In the far future, Man has mysteriously departed, leaving Earth to three Sentient Peoples of his creation: Katts, Dawgs and Mysse. The Sentient Peoples have developed separate civilizations of their own, which flourish but have weaknesses: the Dawgs languish under theocratic militarism; the Katts' society is patriarchal and stagnant; and the Mysse, though clever and well organized, are superstitious barbarians.

Caught between cultures, two non-conformists - a Dawg, Phydo, and a Katt, Thomm - form an alliance that is uneasy at first, but in their adventures they soon become fast friends. They discover Kitti at the gate to the Stairway to Heaven and, at the top, Adam, the last of a Sentient People older than their own. The little band of outcasts joins forces with the wise Dawg Rover Quicknose and even the unlikely Mysse to battle the warrior priests of Kannis.

Lucius, an evil simulacrum of Man left over from Man's last days on Earth, captures the four friends, who have penetrated his mountain lair just as Lucius unleashes on all the Sentient Peoples a monstrous army of mutant insects. In the battle, Dawgs, Katts and Mysse form an alliance that is uneasy at first...

Nearing the end of his life, Adam leads his friends beyond the Andes to an ancient Archive, where one of them must, once and for all and for all the Sentient Peoples, come to terms with their creator.

Thanks to Little Dragon, creator of Furraldo for Poser. Without the use of his character as the body for the Katt and Dawg, the cover would not have been possible.