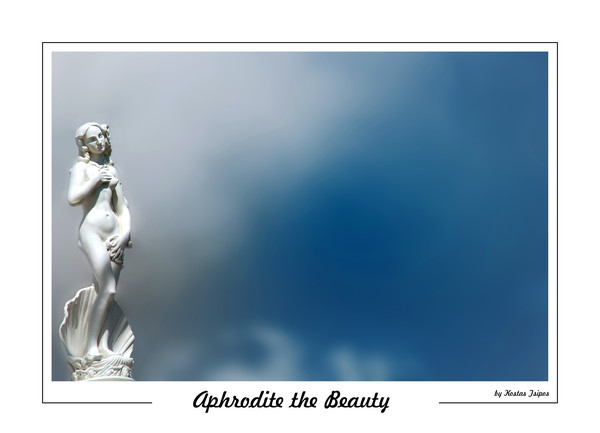 in Greek religion and mythology, goddess of fertility, love, and beauty. Homer designated her the child of Zeus and Dione. Hesiod's account of her birth is more popular: she supposedly rose from the foam of the sea where Uranus' genitals had fallen after he had been mutilated by Kronos. Aphrodite was married to Hephaestus. She loved Ares, by whom she bore Harmonia and, in some myths, Eros and Anteros. She was the mother of Hermaphroditus by Hermes and of Priapus by Dionysus. Zeus caused her to love the shepherd Anchises, by whom she bore Aeneas. Adonis, in whose legend Aphrodite appears as a goddess of fertility, also won her favors. It was to Aphrodite that Paris awarded the apple of discord, which caused the dispute leading ultimately to the Trojan War. Worshiped throughout Greece, she was the goddess of love, marriage, and family life; she was also worshiped as a war goddess, as at Sparta, and as a sea goddess and patroness of sailors. Aphrodite had important cults at Cythera on Crete, at Paphos and Amathas on Cyprus, at Corinth, and at Mt. Eryx in Sicily. Probably of Eastern origin, she was similar in many of her attributes to the ancient Middle Eastern goddesses Astarte and Ishtar. The Romans identified Aphrodite with Venus. -------------------------------- everything here is exactly this shot

nice ,,,love the colors and the effect