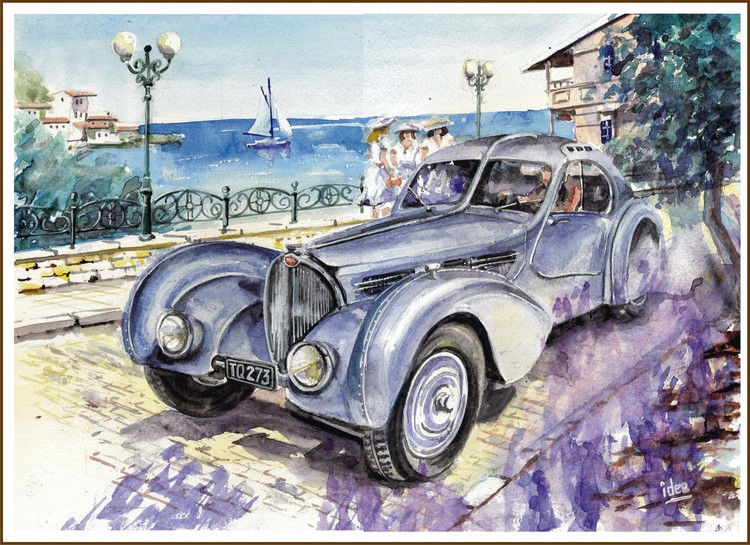 Code-named the "Elektron Coupé" or "Coupé Special" at launch, this Bugatti prototype had a very short existence. It was finished in July, 1935 and only four months later it made its first public appearance at the 1935 Paris Motor Show. The car was a faithful recreation of Jean Bugatti's stunning "SuperProfile coupé" design, but due to its seemingly bizarre shape, the vehicle has brought attention to a very limited audience, thus there were only four Atlantics built the years after. A few people, however, drove the vehicle and were surprised by its performance and looks, so they called it "La Aérolithe" after the phrase "Rapide comme une aérolithe" ("Fast as a meteorite"), a name that was later adopted by Bugatti. Just 43 "Surbaissé" cars[5] and only two supercharged Type 57SC's were originally manufactured. But most 57S owners wanted the additional power afforded by the blower. Therefore, most of the original Type 57S cars returned to Molsheim for the installation of a supercharger, pushing output from 175 hp (130 kW) to 200 hp (150 kW) and 190 km/h (120 mph). In 2013 Ralph Lauren's version, valued at $40 million, was unveiled. Image size: 260 x 360 mm

This John Bugatti, 1935 edition, has been painted by a master of art,...I love your style, content, details and colors. These bring your art pieces to a very high level of quality, value and intrigue!

Ettore Bugatti was just one heck of an amazing mechanical engineering artist. I may be prejudiced... I consider this to be his masterpiece of rolling sculpture. One of the best ever. Thanks. Jim

Artist Reply: Complete agreement Jim, sorry that so few have been built. Although I once heard that you couldn't take a ride with a Bugatti without getting your hands dirty (???)