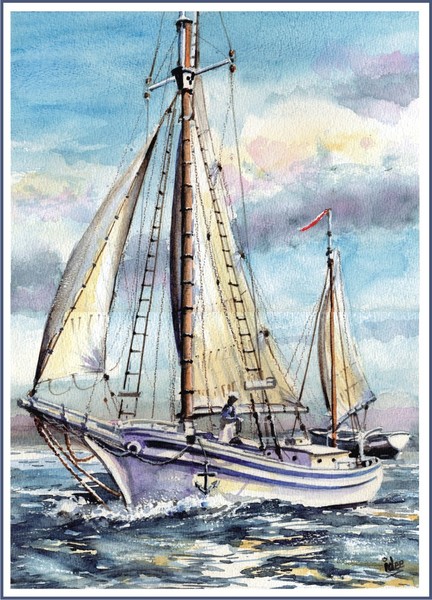 With his rebuilded oister-sloop of 11,20 m, Joshua Slocum was the first man sailing alone round the world. Starting on the third of juli 1895 in the north of America and returning the twenty-seven of juli 1898 after 74.000 km on the oceans. His boat was a very course- stable sloop and even, in those days there were no self- stearing systems avaible, adjusting carefully the sails, he only had to take the helm in bad weather. On the Pacific he sailed 3200 miles without touching the helm. Slocum surely was a very competent navigator, sailing without a chronometer, and mostly thrusting on a dead-reckoning and his sextant, he completed his voyage. In 1900 he wrote his book « Sailing alone around the world » which became an international best-seller. I readed this book many years ago (and I don’t find it in the library anymore, probably not enough interest). The type of boat was famous and became an international classe : the Spray-classe. As concerned Joshua Slocum, in november 1909 he sailed out for a trip to the Carribean and disappeared at sea …. Image size : 260 x 360 mm