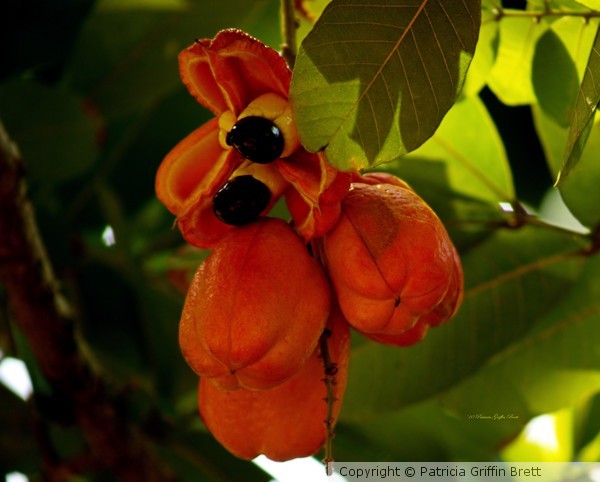 Artist Reply: Hi Marie! Thank you for your comment :) I'm hoping to be back with some new work before too much longer....haven't been active on here since Nov.!

Artist Reply: Thank you so much, John! :) You are always so sweet with your comments!

Artist Reply: Thank you very much, Dee, for that wonderful, uplifting comment :)

What beautiful reds. I love the soft green background against them.

Reminds me of trumpet vine blooms.

Artist Reply: This is part of what Wikipedia has to say about it: "The scientific name honours Captain William Bligh who took the fruit from Jamaica to the Royal Botanic Gardens in Kew, England in 1793 and introduced it to science. The common name is derived from the West African Akye fufo. The term ackee originated from the Akan language.[6] The fruit was imported to Jamaica from West Africa (probably on a slave ship) before 1778.[7] Since then it has become a major feature of various Caribbean cuisines, and is also cultivated in tropical and subtropical areas elsewhere around the world."

YOUR PHOTOS ARE BEAUTIFUL TRICIA !!! THIS ONE VERY UNIQUE, COLORFUL AND GREAT TO SEE. JOANIE

Artist Reply: Thank you very much, Joanie! I appreciate that comment :)

Artist Reply: Thanks, Marika....that was my 1st time seeing a lot of the plants I photographed!!! It was very exciting! :) And I truly loved it & had a blast!!!

What a beautiful and funny floral, Patricia! Reminds me the eyes of Tex Avery's comics! LOL!

Artist Reply: Thanks so much, Stefani....read what I wrote to Stanley above :)

They look like miniature pumpkins with little bug eyes... What a charming botanical!!

Artist Reply: I LOVE your imagination, Beth!!! :) I do that, too! Thanks for your comment!