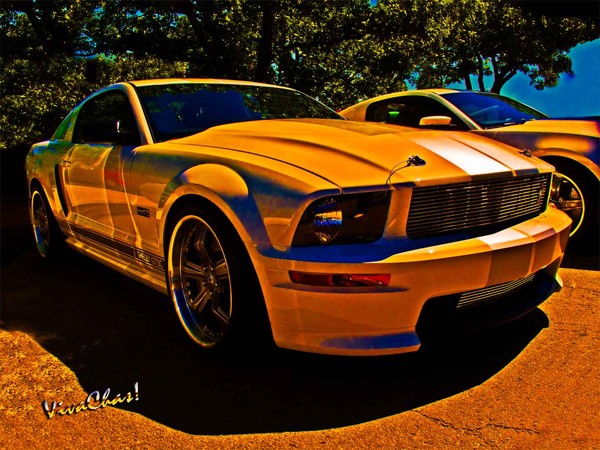 Yeh I named my Mustang Shelby and she's the only girl for me - glad I brought ol' Shelby safely home, not wrapped around some tree - Ha!  The delightful young lady who owned this voracious Mustang GT/SC was so happy that the Ford Motor Company had already named the car for her and had it monogramed on the body-work b/c, as she put it - "I coulda never come up with such a sweet name for it." - I do not make this stuff up (far as u know~:0) Sadly, I'm no brighter than this Mustang's fair mistress for I have no idea what the SC in GT/SC stands for and that's likely b/c I don't much care - Ha!  I do know this though - at one time Ford made a Mustang that was very cool (back in the sixties) and then there was a time when the Mustang mark became something chuckled about behind the hand.  BUT!  I am glad and relieved that Ford has again begun to produce this iconic pony-car to the updated specs we enjoy driving today.  Whew!  I for one thought it would never happen! And another thing!!!  I want you to know I shot this great looking (though essentially stock) Ford in broad daylight and boy was it Hot!  Looks like summer is creeping back into the Texas hill country and we've got the thermometers to prove it!  (for those of U burdened by the metrix system like the folks back home and around this big blue ball - the thermal-meters here in the States aren't calibrated in meters but in feet - inches actually - with 12 degrees per foot and 5280 1/3 feet in a quart - all of which can be simply converted to the metrix system by unrolling a croissant and measuring the circumference and then dividing by the number of mimes stuck between the treads of all four tires [sorry tyres] of a high-performance street racer like Named My Mustang Shelby and she's good enough for me - Ha!  Now click on the Buy it button and gimme the cash!  ~:0) VivaChas! P.S. - this is one of those famous HDR photographs u've heard so much about and I recommend having it done up on the metallic paper b/c it really pops whilst reflecting the light - ooo! What depth! It will look really hip in ur home or office - just sayin' ~:0)

Artist Reply: Crazy Mustang captured on the Square in Boerne, Texas - we used great nets to capture it ~:0) VivaChas!