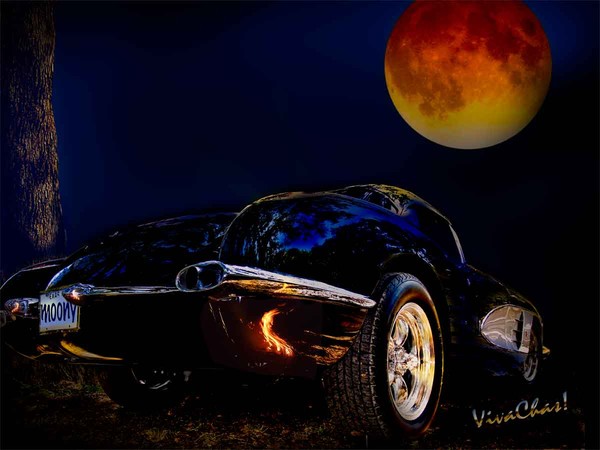 Women! Ya gotta love ‘em. Drag one out to the middle of nowhere, build a campfire and wait for moonrise. Climb on a vintage Corvette? Sure! Da Teaser And That Old Yellow Moon is all about what women will do that men simply will not. ~:0) I suppose number one would be going out to the sticks with the mob from VivaChas! in the middle of the night to make pictures. The next would be something no man would ever dream of doing – climbing around on top of a ’59 Vette. I can feel the disturbance in the Force as a billion male voices cry out in pain at the thought of desecrating such an icon – Ha! Just a car after all – right? ~:0) And with number three of the top things women will do that men will not is likely the most controversial to me. Women know they look great in their new cute shorts, shirt and sandals so why not record such beauty, cuteness, teasatude on film – so to speak. I mean, I’ve never had a model give a moment’s pause to doing anything asked of her before the camera. It’s uncanny! Ya gotta love it and respect such outright understanding of the situation – “I look great! There’s a camera! Let’s make pictures of me!” It all makes such perfect sense and I obviously agree with them b/c I’ll join in and snap the shutter – go figure! Just goes to show – Da Teaser And That Old Yellow Moon is – in my book – the iconic representation of love, life, hot rodding, photography and general fun all rolled into one image made on a moon-lit night deep in the heart of Texas and that is what it’s all about here at VivaChas!