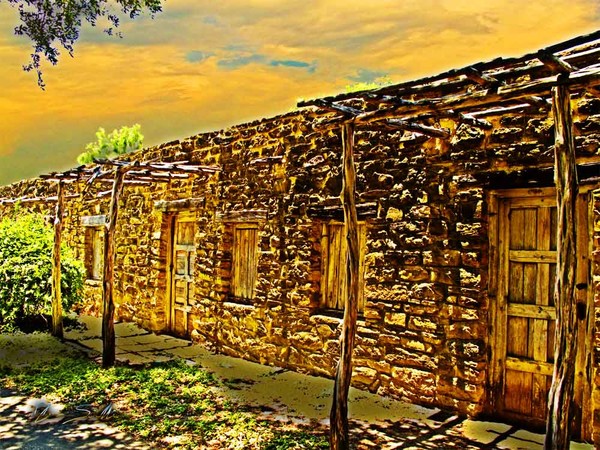 Yeah the real name for these apartments making up the defensive walls of this mission might have been San Jose Apartments – has a much nicer ring to it than the anglicized Saint Joe’s Apartments. When the outsiders have no cannon there’s no need for thick walls so it’s a great place to house the insiders. Most of the apartments are not open for viewing, but the few that are restored are modest by our standards, but were top-notch wilderness-taming housing in the eighteenth century. While the inside of these dwellings were rather dark, austere and relatively cooler but visually uninteresting to me – the exterior was blazing hot (we cut that day short) and spectacularly bright – made dappled shade an important part of the images. Shooting in RAW format gave me the latitude to process the images rather than letting a camera algorithm interpret the scene – this particular pix is a strong example of that sort of personal processing available in Camera RAW which is an important (to me) part of PhotoShop ~:0) VivaChas!

Artist Reply: Thanks Stev - Imagine what we could all do if we could get up b/4 sunrise - woof! - you know I usually wake at that first glow through the window, have a drink of water and go back to sleep for about three more hours - this Saturday going back to Luckenbach for a Hot Rod and Custom Car Show - would be wise to get up and out early - I'll let U know if I do it - Ha! Take Odds Stev-a-reno ~:0) VivaChas