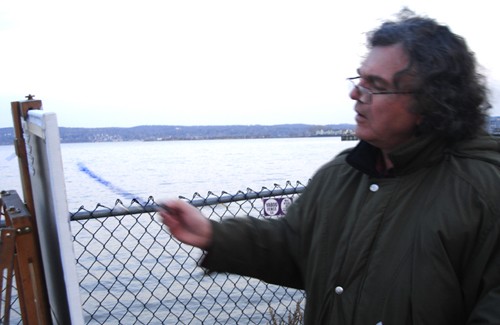 Ylli Haruni was born in Albania. Since little boy he loved to draw and when 14 years old he was admitted in the art school 'Liceu Artistic' in capital of Albania, in Tirana where he was studying vision art for 4 years. After that Ylli attended the academy of Art in Tirana for 4 more years and graduated it in 1976. More than 13 pieces in the Albanian National Art Museum. Three times awarded from the Albanian Parliament. Became a well known artist in Athens with his works in Metropolis Art Gallery LTD from 1993 on. In 1994, comes to reside and work in United States.

His one man shows in various art Galleres in New York, as well as at “Artexpo” in Javit Center, Manhattan New York and in various shows organized by East-West association of artists in 1997, in 2000, 2008, 2010,2011,2012 makes the artist earn the admiration of New York art fans. Ylli’s paintings are mostly painted on location. Many art galleries nation wide in USA and Canada proudly display Ylii's artwork, like Rockland Art gallery In Nyack NY, Brian Art Galleries in Buffalo, Palisades Art Gallery West Nyack NY, Gallery Direct Art in Paxtonia PA, River Coyote Gallery in Lake Shore Mississauga Toronto, etc. His work has been praised by major publications worldwide, including The Washington Times and The New York Times.