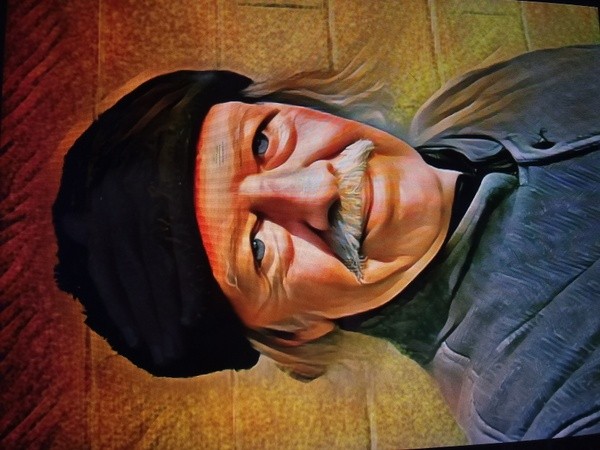 Tim Carney, former resident of Riverside California, has devoted the past 40 years to developing a unique art form, which some have labeled "Optical Art." He applies innovative diffraction techniques to mixed media projects on canvas, wood, metal, and stone. He prefers the complexity of irregular multi-dimensional surfaces, but also enjoys the challenge of creating the illusion of space and light on canvas. Tim's work is frequently on display in local galleries. Much of it is held in private collections.

Tim has invented several methods of printing with holographic foils onto unconventional surfaces, most notably, beach pebbles. Through a combination of gift giving and local sales, these "Alien Opals" have been distributed globally. These treasures have made their way to homes in Nepal, Japan, Siberia, the UK, Hawaii, Southern California, all over the US, the rainforests of Brazil, and elsewhere.

The inspiration for Tim's artistic inventions drew their source from his experiences working at a steel mill in Fontana, California. Following family tradition, Tim began his career as an industrial maintenance mechanic by working in the open hearth plant at Kaiser Steel Corporation. The visual spectacle afforded by the proximity to tons of boiling metal and blinding incandescent fires continues to haunt Tim's artistic imagination. Fascinated by what he now describes as working within a man-made volcano, Tim glimpsed a vision of the futurist direction his art would take.

The power of human industrial technology to create lakes of boiling steel sparked Tim's ambitions to glorify energy and motion in artistic works that anyone could experience. In Tim's pieces the elemental forces of fire and water appear unified in a singular dynamic. They also inspire the viewer to participate in the play of forces by calling upon her to observe these artworks at different angles, which animates the works' designs.

Besides noting the uncanny fire-water characteristics of Tim's play on light, many viewers remark on the cosmological and biological symbolism of his imagery. These influences stem from Tim's private study of materials engineering, electromagnetism, lasers, radiation, astronomy, human physiology, and naturopathic medicine. Tim has also drawn inspiration from surrealism and abstract expressionism, in which dreams and abstract ideas become visually manifest.

Presently, Tim is working on the creation of various large scale canvases and 3-D wall hangings for exhibit and sale. Future plans involve experiments with cholesteric liquid crystals manipulated by fluid dynamics in the construction of kinetic sculpture.