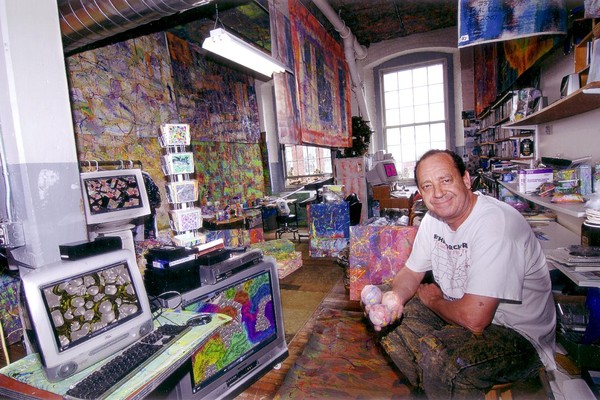 Sidney Hipple the artist's artist, the man with the plan, the original aboriginal, prince of prints, and king of the slapmouse school of digital origami. Critics rave about Lenny Hall's dynamic fusion of cool Northern intellectualism with warm-blooded Southern bonhomie. He combines the geometry of Kandinsky with the sensuality of Renoir and the hyperactive imagination of Hieronymous Bosch to create a new artist for a New Age, an artist who is not afraid to embrace the technogeek empire of the new millenium with open arms. In his capable hands even the softest software comes to life and screams out its inner artistic beauty. For years Sidney Hipple has labored in the stoneyards of artistic vigor, hammering out one masterpiece after another, staggering on through the storm despite enormous trials and tribulations. Even while battling episodes of digitalis, brain fever, and mouse cramps,Sidney Hipple has found the energy not only to produce prodigious quantities of digital art, but also music. He occupies an entire gigabyte of storage space at such musical websites as IUMA and CD BABY. But music and art are not the limits of his creative energy. He is a master of stagecraft in the Lowell area and a photographer and videographer as well. Sidney Hipple,truly the artist's artist. Enjoy!