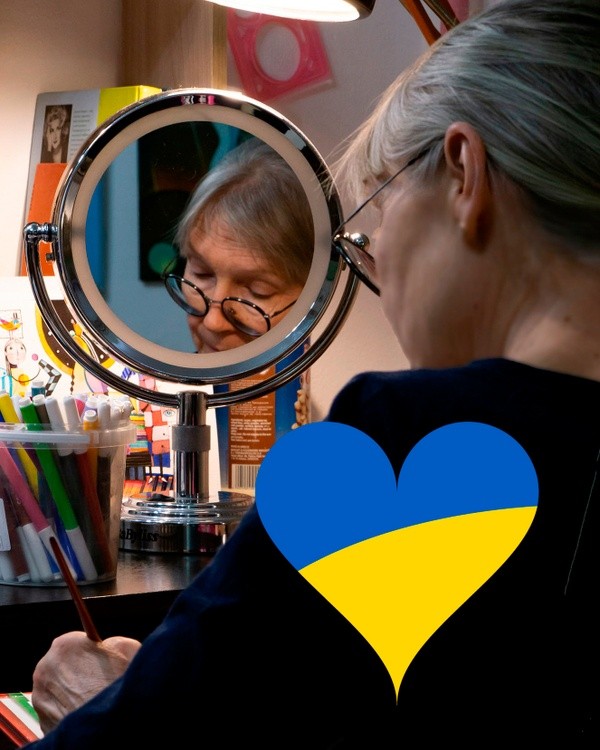 I became an artist because my grandmother, a graduate of the women's gymnasium in 1916, believed that a young woman should know all the arts. As a result, I entered the children's art school, and emerged four years later with the ability to draw a plaster head of an ancient god, paint a still life, and with the question, what to do now? Most of my friends went to art colleges in other cities, but my parents didn't want to risk such a life for their only child. So I finished public school and, in 1976, entered an architectural institute.

I worked as an architectural designer in the eighties, with its endless technical drawing, until some years later when I made time for more creative work. When I understood that architecture was not for me, I began the road of trial and error, but at least it was my own road.

My work was shown abroad for the first time and sold in Italy. In 1992, I accompanied 15 of my canvases to Germany for the ART HAMBURG show. This was the first opportunity to compare my work with that of other artists in an international exhibition, where half of my works were sold. Other successful trips to Europe followed.

During the continual process of learning, studying art and the history of art, I found myself under the spell of first one artist and then another. As a child, I fell in love with the characters in the novels of Irving Stone's THE AGONY AND THE ECSTASY and DEAR THEO about the lives of Michelangelo and Van Gogh. In my youth, I tried to copy the artists who charmed me most, but these were stopovers on the path to find my own way. I was, at times, sick with measles and chicken pox, just as I was sick with the French impressionists and the Russian avant-garde of the 1920-30's. I still admire the models of Renoir and the creative road of Malevich as much as I did when young. The personality of Picasso shocks with its scale. Dali - a unique volume among the collection of volumes of my favorite artists, op-art with Andy Warhol as a leader, Russian socialist art - all of it beautiful and worth attention. It is necessary to find, examine and separate your unique voice from among those beautiful, strong voices, and that is exactly what I am busy doing.

Here http://www.youtube.com/watch?v=ZIv9uFHFKg4 you can watch an old short video from my first personal exhibition in the year of 1995.