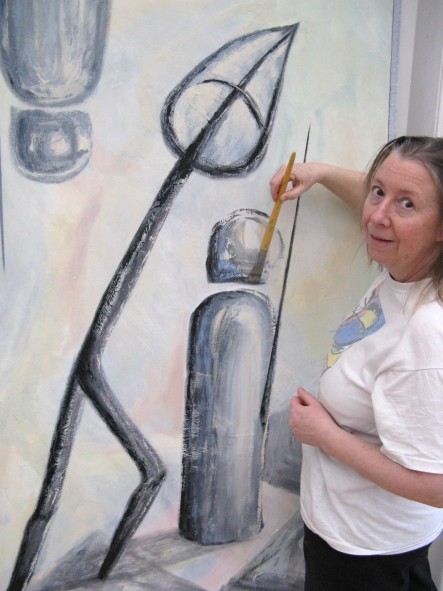 Life and work Elke Rehder studied at the Heatherley School of Fine Art in London (1979-80). During that time she was predominantly active as a sculptor, where she created objects from iron, steel, copper, granite, marble as well as small bronzes in lost-wax castings. During her stay in London the symbolism of chess becomes a centrepoint in her artwork, following a statement by Boris Spassky: "Chess is like life". Since then, Elke Rehder creates installation art and land art projects centered around chess.

In 1991 Elke Rehder started the international cultural project "Kulturgesellschaft Europa", which is accompanied by statements of important personalities from the cultural, economical and political world. 1992 she was honored with the award "Bernhard-Kaufmann-Kunstpreis" in Worpswede.

Artists' books Since 1993 Elke Rehder concentrates on literature[10] and lyric poetry[11] and founded the "Elke Rehder Presse" for printmaking. With her artists' books she participated several times at the Leipzig Book Fair, the Frankfurt Book Fair and the largest book fair for small publishers and artistic hand press operators in Europe "Mainzer Minipressen-Messe". At the international antiquarian book and arts fair "Quod Libet" in Hamburg she presented a portfolio with etchings to The Trial by Franz Kafka and woodcuts to The Royal Game by Stefan Zweig. Beside her fine press publications Elke Rehder creates numerous painted books, book objects and paper art objects.

From 1991 to 1993 she deepened her knowledge of painting at the Federal Academy of Cultural Education in Wolfenbüttel and of graphic arts at the Hamburg University of Applied Sciences.