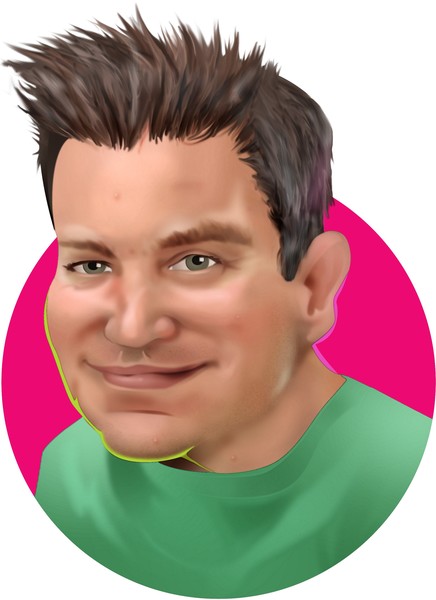 I graduated from Scranton Central High School in Northeastern Pennsylvania in 1989. I had dreams of becoming a cartoonist, specifically in the field of hand drawn animation. So I applied to several art colleges across the east coast. I eventually enrolled at The University of the Arts in Philadelphia where, in 1993, I obtained my Bachelor of Fine Arts degree in Animation. With a fresh portfolio and demo reel, I was determined to set the world ablaze.

Immediately after graduation, I landed a job creating graphics and animation for computer games. This was still the 90s, of course, so the computer gaming industry was still in its relative infancy. There were no fancy high definition 3D vector graphics. Everything was two dimensions, hand drawn, pixel by pixel. While working at Epic Games (then Epic Megagames), I became part of the team behind the best-selling, award winning PC shareware game, Jazz Jackrabbit in 1994 and its equally beloved sequel, Jazz Jackrabbit 2 in 1998.

By 1999, the entire gaming industry was making a shift to the third dimension, however, so it was time for me to make a life change. I grabbed my art supplies and my drawings and headed on out to Southern California -- Hollywood! -- to make a name for myself in the television and film animation industry. By this time, Pixar had set the box office on fire with Toy Story and A Bug's Life, and suddenly two dimensional hand drawn animation had fallen out of fashion in the entertainment industry as well. That's right. I wanted to work in hand drawn animated films, but as it turns out, they're not making those anymore. Meanwhile, I'm still dealing with tuition debtors wondering where my loan payments are because, as it turns out, I wasn't making those anymore! Needless to say, it was time to reinvent myself.

Having gotten a head start with computer skills very early on, I was able to land a job at a printing company where I quickly learned the ropes of operating what would become the most commonly used graphic design tools in the field. I was eventually recruited into the magazine industry, where I was responsible for color correction, photo retouching and illustration. I was immersed in the world of publishing - typography, color, bleeds, crop marks, oh my! I utilized my creative talents and began entering creative art and design contests, winning several awards and, by 2004, amassing my own personal portfolio of production art and graphic design.

With this new portfolio of work, I landed a career as Art Director at Village Lighthouse, Inc., the parent company of 10%, the leading producer of consumer products targeted towards the LGBT community. Over the course of nearly a decade, I produced hundreds of greeting cards, calendars, DVD covers, and more.

Now I once again find myself starting anew, making a home for myself in Phoenix, Arizona. I'm ready to take on your design challenges!