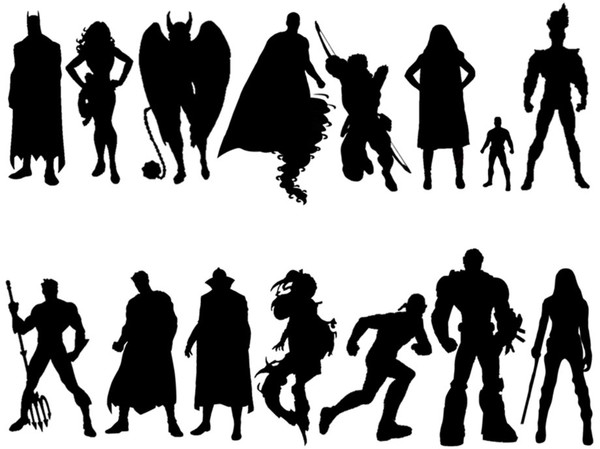 The proliferation of pop-culture friendly street-literature and penny-novels and romance-paperbacks and, of course, comic books, has given rise to a new medium/genre of storytelling and literary art --- the Fan-Fiction(!).

Fan-Fictions or 'fan-fics' are works of fiction generated by everyday people (laymen) who blog/post their stories on the Internet. These 'fan-fics' are allusions or direct references to already-established/published works of art or movies or famous/iconic characters from books, comics, etc.

Fan-Fics might be of a Green Arrow (DC Comics) special issue comic book or a Superman movie made in Hollywood (USA) or a short-story inspired by a Stephen King novel or Hardy Boys series of detective novels. Fan-Fics therefore represent our modern age fascination with streamlining the great traffic of media-access based entertainment/arts (e.g., Netflix, YouTube, MTV, etc., etc.) into fanfare-oriented layman-works of fiction (e.g., a fictional re-interpretation of a Itchy-and-Scratchy cartoon story from a cut-out episode of the iconic Fox-TV family-comedy series by James L. Brooks, "The Simpsons").

Fan-Fics capture our new age interest in re-expressing social media traffic and entertainment into a presentation of pulp or pop-fiction oriented 'quickie drama' or even 'no-cost fantasy'(!). Perhaps fan-fics grew out of our appreciation of interpretive theater, or graffiti-art, or street-performance, or choose-your-own-adventure books, or karaoke, or even Crayola crayons(!). Regardless, fan-fics represent modern art in its most convenient and simultaneously 'self-gratifying' format!

The more older and classical art of Shadow-Puppetry or 'shadow-theater' involved the presentation of ornate or very pretty shadow-puppets arrayed to present a story or silent-action/fantasy performance. Shadow-Theater was arguably a 'predecessor' to today's Internet Fan-Fiction 'medium' since it also represented a 'traffic-oriented' fascination with 'pedestrianism daydreams' (e.g., street-performance oriented life-themed 'karaoke')!

Fan-Fiction, like Shadow-Theater, is therefore an inventive genre reflective of a social celebration of imagination indulgence and the 'tasty comforts' of lively or live-action 'creativity.'

We might therefore ask if modern Internet Fan-Fiction is something that necessarily requires a serious focus on the intellectual analysis of 'dramatic grammar.' In other words, would a fan-fic about, say Green Arrow (DC Comics), tackling a mysterious shadow-monster called Alley-Bob represent our modern social curiosity about the intelligible communication of traffic-based street-jargon (e.g., urban hate-crimes reflective political correctness)?

What would you say about the 'dramatic grammar' of the following Green Arrow (DC Comics) fan-fic I just wrote --- shown below (for example)?

How do we separate meaningless graffiti from populism expression?

"The superhero archer Green Arrow was in Washington, D.C. He was tracking a nefarious and frightening evildoer who was methodically decapitating D.C. cops late at night who were on patrol in the nation's capital. Green Arrow read in the Washington Post that this deranged terrorist was given the name 'Alley-Bob' (since he seemed to 'leap out' of D.C. alleys when patrolling cops were walking by late at night!). Green Arrow felt it was his patriotic duty to deal with this modern urban nemesis named Alley-Bob.

Green Arrow also realized that Alley-Bob was targeting D.C. cops to create media hysteria about Washington civics going 'awry' and therefore leading to social paranoia about our government failing to embrace this new age of incredible populist traffic (i.e., pluralism/immigration) with adequate doses of law and order(!). Green Arrow knew that if Alley-Bob was not stopped, there would be a media-craze that would drive Americans into thinking that the modern trend of high immigration and capital traffic was simply and somehow...unmanageable.

Green Arrow managed to corner Alley-Bob one night while soaring above the rooftops on D.C. trying to track the modern terrorist. Green Arrow found Alley-Bob lurking in an alley(!) while two lone cops were about to walk by on a Washington street doing their regular patrols late at night (2 a.m.)! Green Arrow jumped down from the roof right in front of Alley-Bob and demanded he stop his reign of terror and either vanish from the face of the Earth or surrender himself for a life in prison (for having decapitated about a dozen D.C. cops --- all dutiful and patriotic American men!).

ARROW: You're a vile terrorist...

ALLEY-BOB: Americans need to understand the 'frailty' of urbanization.

ALLEY-BOB: How else will you draw attention towards new age cynicism?

ARROW: What do you mean?

ALLEY-BOB: With all this 'capital traffic' there must be a dose of humility!

ALLEY-BOB: Yes, youngsters in America watch too much rock-and-roll.

ARROW: You mean, they ignore the 'problems' of traffic and crime?

ALLEY-BOB: Precisely; I want to show Americans the inherent urge to destroy!

ALLEY-BOB: Do you believe Americans pray about the Los Angeles Race Riots?

ARROW: The Race-Riots of 1992 simply showed us that modernism is 'complex.'

ALLEY-BOB: Killing cops in this great city will remind America that governance is absolute!

ARROW: We can't torture people's imaginations by punishing them for 'pedestrian ignorance.'

ALLEY-BOB: So, you're a fan of 'juvenile delinquency' and 'vagrancy' and 'apathy' forgiveness...

ARROW: No, I don't arbitrarily 'pardon' foolishness, but you must be stopped to save the nation's chatter!

ALLEY-BOB: Maybe I'll be incarcerated (or executed), but remember my omen --- heed the evil of gibberish."

What do you think readers? Is such a populism-symbolic 'fan-fic' representative of a modern critical need to 'dissect' the 'dramatic grammar' of traffic-based folklore? Is modern social media oriented entertainment a 'thing' of intellectual labor?

Thanks for reading, and I'd love to hear thoughts/comments on this media-metaphysics issue(!),