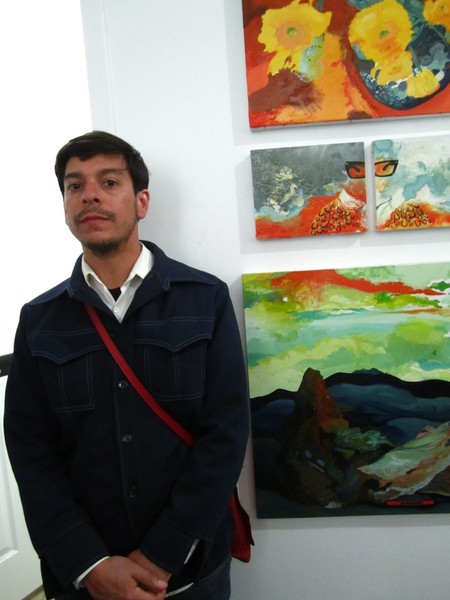 I like to watch the waves crash and pull at the sand. I like to walk this line. Here the sea shakes her skirt, dancing with gravity. A natural constant, ever-changing push and pull. When I walk this line, I feel I am one, with all.

I've been making and looking at paintings all my life. The beauty in hand, personality, era, time (political, romantic, self indulged, humorous, giving and taking) of and in the moments composition placed. Oh oh let's sing a song about color. What beauty! I have been born to breath in and exhale, a true joy of love and wonder, in the strokes of every moment.

I was a finger painter first. My mom owns that collection. I moved on to clay dinosaurs and drawings of space aliens on prayer pillows. I fell in love with Surrealism. Now I continue to find pleasure in watching the waves move and the birds break the tops of mountain peaks. I believe that a pretty picture, is a pretty picture. What a great feeling to find joy in a pretty picture! An honest beauty. The picture is stagnant. The way you look at that picture will change with time. This is the wonder of art!

I hope you see the light in my work. It could not be attained without shadow.

I grew up in San Jose CA, attended Willow Glen High School (1988-91), Graduated from Lincoln High School (1992), completing two AP art programs taught by Mike Ellner. Throughout high school I sang in a band called Flying Dead Skin. I showed my artwork at The Rosicrucian Egyptian Museum and the Willow Glen Library. I worked for the City of San Jose's Parks and Recreation. I attended the SF Academy of Art University (1997-2002) on CAL Grant scholarships. I completed my studies with Tim Racer. I sang and played music in Ringwurm, Lemming, 1/2 Bastard, Stag, Your Mother, Happy About Everything, Chu Chi Nut Nut and the Pine Cone Express, The Abominable Snowband, Emo Summer, Sparkle Pony and the Fluffy Cloud, and The Unit Breed. I continued to work for the City of San Jose's Parks and Recreation. I worked as a Film Technician for Linotext. I ran a record label called Nothing Records and Nothing Everything Records. I self published an art book "A Proxy of Noise". I worked as an Illustrator and silk screener. I toured across the United States, Canada, Australia, New Zealand, and Hawaii with The Unit Breed, Ringwurm, Emo Summer and Your Mother. I held shows in my backyard for traveling and local musicians. I recorded many local and touring groups on a half inch Tascam analog 16 track. I showed my artwork at Circle-A Gallery, The Genesis Art Gallery, Cafe Matisse, Radio Free Records, Faux Salon, Hijinx Comics, ABCO Waterproofing Gallery, The Gallery of Santa Clara, and converted my living room into a gallery. In 2003 I showed at East Carolina University, Mendenhall Gallery, in Greensboro NC. I also participated in the Pacific Art Collective. I moved to Portland OR (2005). I continued to tour the United States and Japan as The Unit Breed. I toured with an art show, hanging surreal paintings all over basements, rock clubs, restaurants, living rooms, skate shops, vet halls, backyards, front yards, bars, coffee shops, sushi bars, small galleries and many other unusual underground atmospheres. I moved to St. John USVI and worked at the Sun Times Newspaper. I displayed my artwork and bar backed at Happy Fish Sushi and Martini Bar. I moved back to Portland OR (2006 - 2010). I played drums in The Pink Snowflakes. I sang with Aisles. I played drums in Hyenas. I worked for 1(800) Got Junk, I worked at Fed Ex Kinkos (2007-2008). I continued to tour, paint and record (Switching from Analog to Digital). I began making music videos and live projection shows for The Unit Breed. I made a board game called Shut Up and Play!. I showed my work at the Alberta St. Art Walks, participated in Portland's Salon De Paris, had three shows at Monochrome Gallery, a group show at Milepost5 and two shows at The Tin Shed. I started a record label called Idiomism (2009). I began participating in the US Air Guitar Championships as Father Captain Nowhere, later to become Captain Nowhere. I moved back to San Jose CA (2010). I traveled through Mexico, Maui and many US states. I started a cable access TV show on CreaTV in San Jose CA. called Welcome Back!. I wrote and recorded Captain Nowhere's "Party Time Inc.". I displayed my artwork at 31 Rausch St in SF and The Uptown Nightclub in Oakland. I moved to Encinitas CA (2011). I traveled to Italy. I moved to Ranchita CA. I became a member of America Fine Art Group and The Laguna Art Group. I have shown at The Hall of Champions Sports Museum for the 2nd Annual Hammer Festival and Filter Cafe in San Diego, Tygers Den and the Chocolate and Art show in LA. I moved to Oceanside CA (2012). I am currently writing and recording demos for a new album, painting in the plein air competition in Torrey Pines, showing at this years Spring Art Show in Carpenter park in Cardiff CA and making plans to show my art at Indigo Dragon in Encinitas CA.