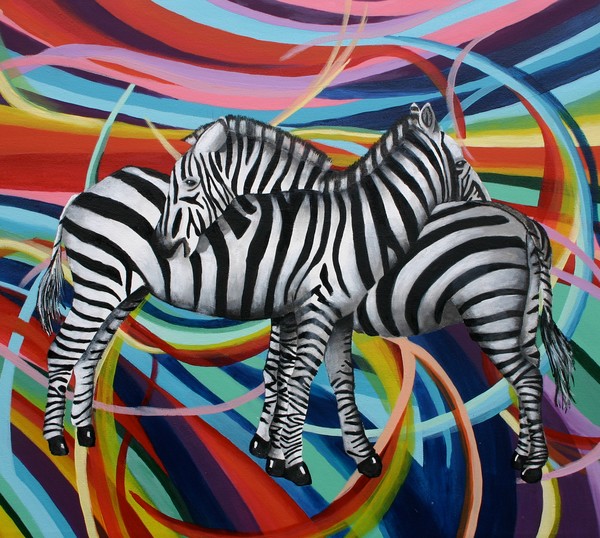 In any good relationship there is an element of protecting each other from harm in whatever form it takes. These zebras appear to do so literally. The black and white stripes of the zebras are in stark contrast to a non-traditional multi-coloured rainbow. Rainbows have meaning in many cultures, to name only a few: According to Genesis God purged the earth of evil by flooding the earth, sparing only what came with Noah on the ark. When the rain stopped God sent a rainbow as a sign to never flood the earth again. Greco-Roman and Norse mythologies view rainbows as a bridge between Heaven and Earth. In Chinese mythology, the rainbow was a slit in the sky sealed using stones of five different colours. In Hindu religion, the rainbow is the bow of Indra; in Arabic, it is the war bow of the god Quzah. In Armenian mythology the rainbow is a belt of the Sun god. The Irish leprechaun's secret hiding place for his pot of gold is considered to be at the end of the rainbow, an impossible to reach.

$400 when purchased directly from the artist. Contact [email protected] for more details.
$ 450.00

what did she use to make this?

Artist Reply: This is acrylic on canvas. :)

Artist Reply: Thanks Katerina. I thought it was interesting that they "have each other's back"!